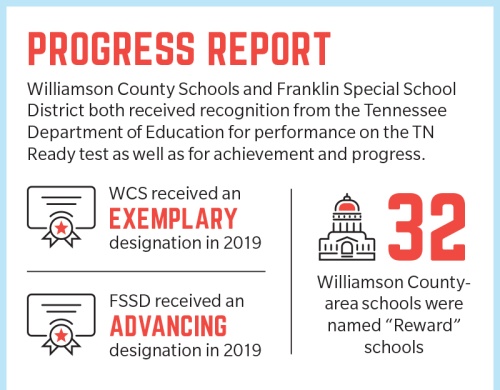 On Aug. 15, the Tennessee Department of Education announced test results for TN Ready, the statewide standardized test administered to elementary, middle and high school students every spring. Schools in Williamson County have received two of the top rankings from the state.

The TNDOE combines test scores with a number of other evaluating criteria, including graduation rates and absenteeism rates, to determine district accountability scores. For the 2018-19 school year, Williamson County Schools received an “Exemplary” designation, and Franklin Special School District received an “Advancing” designation.

“Being named an Exemplary District by the State is a testament to the hard work of our school district community,” Williamson County Schools Superintendent Jason Golden said in a statement. “I am so proud of our students, teachers and administrators and thankful for the support of the entire community. Our students successfully demonstrated their knowledge of the core subjects on this assessment snapshot.”

School-specific scores mark the percentages of students considered “on track” and “mastered” in a particular subject. On average, students throughout WCS 60% or higher across most subjects. Franklin Special School District, meanwhile, was one of only eight in the state to score in the top 10 in math, social studies and English and language arts, according to the district. Additionally, both districts improved their math scores over last year’s, and Algebra I scores improved statewide, according to the TNDOE.

However, while FSSD received top scores in achievement for math and social studies, the district saw a drop in its literacy score growth. District officials said while the number of students with proficient literacy scores remained about the same, the district did not see much year over year improvement, resulting in a lower overall score for that subject.

“I am extremely proud of the dedicated work and support that our teachers provide daily to students of all ability levels,” FSSD Director of Schools David Snowden said in a statement. “This data reflects many of those successes.  There are some areas to improve, and we will spend the next few weeks analyzing the data more deeply to determine appropriate next steps at the school and district levels. We remain determined to meet the needs of every student and to provide the teachers with all of the support and resources that they need.”