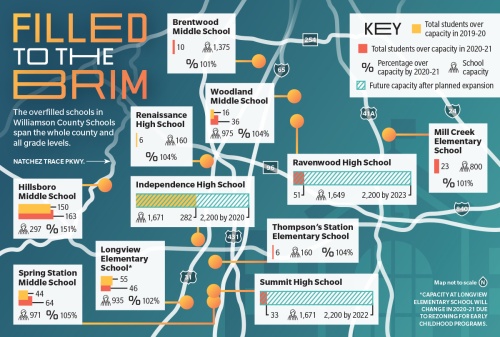 Local officials cite public education as one of the major draws to Williamson County, but steady population growth means the school system is dealing with overcrowding. As a result, district officials are planning to build 16 new schools to keep up with demand, according to Williamson County Schools’ capital plans.

Williamson Inc., the county’s chamber of commerce, released a study in April announcing the county’s population is projected to grow to more than 536,000 people by 2040, an increase of 153% from 2010. The population of school-age children has already grown by 139% over the past 15 years, according to a similar study by the Williamson County Association of Realtors with the Jones College of Business at Middle Tennessee State University.

Williamson County Commissioner Betsy Hester, who is a former educator, said education has been a primary driver of growth in the county for some time.

“Living here since 1980, I saw that the county decided to invest more money in education. ... That is one of the biggest factors, if not the factor, that we’ve had such growth in Williamson County,” she said. “People are moving here for the schools.”The county currently serves more than 40,000 students, according to WCS, and a growth of 2.8% is expected for the 2019-20 school year.

To help combat overcrowding while the district works to build more campuses, portable classrooms are in use at some schools, and some elementary school instructors have had to give up their classrooms, according to WCS interim Superintendent Jason Golden.

“When an elementary school goes over [capacity], we need extra space right then,” he said. “That might include eliminating what we call a ‘specials’ classroom, which might be art or music, and those particular teachers will travel on a cart and bring their materials to a particular classroom, while those students stay in that class.”

However, the district is also looking to prepare for long-term growth in the district and not just by building new schools, Hester said.

“There are things like paving the driveways, new roofs, new heating and cooling systems [for existing schools],” she said. “The best temperature for educating students, I learned in education school, is 68 degrees. That’s pretty hard to achieve when you have to watch your pennies.”

The WCS general-purpose budget, which funds operations and does not include costs for capital improvements, school cafeterias or after-school care, has swelled nearly 20% from $300.17 million in 2014-15 to $357.42 million in the 2018-19 fiscal year, according to WCS Open Finance resources. The district asked the county for $386.24 million for 2019-20, according to the proposed budget. This will have to be approved by county commissioners.

WCAR President Kyle Shults said the highly rated public education system is one of the reasons the county is growing at this pace, along with job opportunities and other public features that add to residents’ quality of life.

“The top two things that drive migration are economic opportunities and local amenities,” she said. “If those two things exist in a single place, growth will happen.”

Employers are racing to the county as well. Williamson County added 30,000 jobs between 2013 and the end of 2018, according to the Williamson Inc. study. That is a rate of 29% growth, compared to 17% for the Greater Nashville area as a whole.

Shults said growth in the county is a “virtuous cycle,” where the high-performing education system and other factors like a low tax burden create job growth, leading to more population growth.

“I really think that it builds on itself,” she said. “We’ve grown, and the county leadership has been incredibly fiscally responsible and smart in how they have reinvested those resources back into the community to make sure that all those pieces of what quality of life looks like—from parks to schools, all of that is there—and in turn it brings more great jobs.”

She said that when businesses move to town, they are looking to tap into the well-educated local workforce, while also putting their own children into the same schools.

“Employers that are coming here see the results from their kids that they put into the schools,” she said. “They know that the people working for them are going to want to be here.”

While Shults said the population influx is spread across the county, school zones just outside the city in Franklin have the most need for overcrowding relief, according to WCS data.

Just south of Franklin, a cluster of WCS schools in the Spring Hill and Thompson’s Station area are also experiencing overcrowding, and the area is expected to need more schools in the future to accommodate a growing population. Kayce Williams, economic development director for the city of Spring Hill, said the growth in that area is “tremendous.”

“We’ve grown by over 2,000 people per year, every year for the last six to eight years,” she said. “There’s somewhere around 15,000 houses in Spring Hill now, and about 9,500 that have been approved over the years that haven’t even been built yet.”

Sixteen new schools, plus expansions at some existing facilities, are planned to accommodate the growth, according to the district. WCS officials said the aging Brentwood Middle School will also be replaced, bringing the total to 17 new school buildings.

Of those, 12 large projects, including 10 new schools, are in the pipeline for the Franklin and Brentwood areas.

Six projects are within the Page High School feeder pattern in the eastern part of Franklin, including the current renovations and expansions at both Page High School and Page Middle School.

Those expansions are set to be complete by fall 2021, according to the capital plan. Three new elementary schools, plus a new middle school and a new high school, are planned for the Page feeder zone.

In Brentwood, the Ravenwood feeder pattern is expected to receive a new middle school, elementary school and high school by 2023-24, according to the capital plan. Ravenwood High School is projected to be over capacity by the 2020-21 school year.

WCS’ budget is funded by the Williamson County Commission. In total, new school construction is expected to cost the county more than $383 million in the next five years, according to the district.

Hester said that funding schools properly is “very close to the top” of the county’s priorities, but that budget responsibility is still key, and some projects may have to be pushed further into the future for financial reasons.

“We look at everything in that way, and that’s because we certainly don’t want to raise taxes every year, but we do know that we have needs,” she said. “The trick is trying to determine what is a want and what is a need and how we can save money.”

“We’re trying to keep up, not just with teachers but with support staff for those teachers,” he said. Positions that are difficult to fill include bus drivers and special education teachers and assistants, according to the district.

Although keeping up with the demand can be challenging, Golden said the constant growth has the benefit of bringing in fresh perspectives.

“What’s great about it is, we’re bringing in new talent all the time, and we’re always on the cutting edge because we need to be,” he said.