Revenue gift agreement for FSSD struck down by county 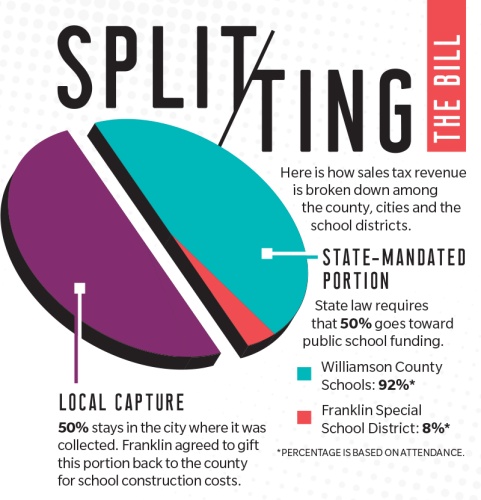 Officials with the Franklin Special School District are considering the consequences of missing out on a portion of Williamson County’s 2018 sales tax rate increase and mulling over their options for another try at recouping the funds.

Since September, local officials have been seeking a resolution to a misunderstanding that left FSSD out of a sales tax revenue-sharing agreement among Williamson County, its municipalities and Williamson County Schools. On March 11, county commissioners voted down a proposal that would have “split the bill” between Franklin and the county to pay FSSD for its assumed share of the funds, shutting the door for now on a legislative solution.

According to Tennessee law, all local sales tax revenue is split evenly between the local school district and the entity in which the tax was collected. Since there are two school districts represented in Franklin, WCS and FSSD traditionally split their share of the money at a 92 percent to 8 percent rate based on average daily attendance, with WCS taking the larger share.

Franklin City Administrator Eric Stuckey said he and other officials were under the impression the revenue gifted from Franklin to Williamson County would be split between FSSD and WCS in the same way as the state-mandated portion.

“That specific question wasn’t asked, or assumptions were made by folks that it was going to be done the way it normally is, about Franklin Special getting a cut,” Stuckey said.

The county projected that the sales tax increase would raise $60 million for capital improvements in three years. If FSSD had been included in the agreement, it would have received an additional sum between $1.8 million and $2.4 million over the three-year period, according to estimates from the Williamson County Department of Budget and Purchasing.

Now, district officials said FSSD’s plans for new facilities and improvements to existing facilities could take longer without that money, though school programs will not be affected, according to FSSD Board Chairman Tim Stillings. The board met with legal counsel March 14 to discuss potential options, he said.

“We are exploring and considering and learning more about different options and interpretations, and we hope to get a good, solid recommendation from our legal counsel sometime soon,” he said.

In January 2018, WCS submitted its 10-year growth plan, which estimated that the district will grow by up to 20,000 students in the next 10 years, leading to a need for 17 new schools, according to the plan. Construction of those schools is expected to cost more than $500 million over the next five years.

Since the county is responsible for the funding of WCS, Williamson County Mayor Rogers Anderson proposed raising the local sales tax to the maximum of 2.75 percent and asking the cities to donate their portion of the additional revenue from the increase back to the county to pay down construction debts for the schools. Residents approved the sales tax increase with over 66 percent of the vote. It took effect last April.

But in September, FSSD officials informed the city of Franklin that the district had not received its share of the gifted revenue from the county.

The memo of understanding, which sealed the “gifting” agreement between Franklin and Williamson County, was signed by Stuckey, Anderson and his chief of staff Diane Giddens, Franklin Mayor Ken Moore and attorneys from both sides. It did not mention FSSD or the 92% to 8% pro rata split, according to the document.

“We believe that [voters] were of the understanding ... that the district would receive its pro rata share of all of the increased sales tax revenue,” FSSD Director of Schools David Snowden said. “Nobody at that point in time talked about—from the side of the people who were presenting it—that there were two pots of money, but we are only going to share in one pot of the money,” he said.

Multiple city, county and school officials characterized the situation as a misunderstanding or miscommunication.

In response, the Franklin Board of Mayor and Aldermen passed a resolution stating their original intent.

To resolve the situation, Stuckey proposed lengthening the city’s commitment to gifting its sales tax revenue to the county by six months and splitting the funds between the districts.

“Make it a longer period of time; make the pie bigger,” Stuckey said. The BOMA voted 4-3 against that solution, stating that Franklin was already paying the county enough.

Another proposal was drafted to “split the bill” between Franklin and Williamson County. Proposed by County Commissioner Brian Beathard, whose district includes FSSD, the resolution said the city and county would each pay $300,000 a year over three years to FSSD to cover the district’s share.

The proposal failed 13-9 due to county commissioners’ concerns about the county’s share of the “split bill,” arguing it would be coming from the county’s general fund, which is paid into by the whole county.

Anderson said residents may not want their tax dollars going toward a school district their children cannot attend, since FSSD is limited to those who live within its boundaries.

“If you lived in Brentwood and your sales tax was going in, your property taxes and things were going into this county general fund, then why do their dollars need to go to Franklin Special when they have needs within Brentwood?” Anderson said. Snowden said the district was not giving up on the money just yet. “I think parents do expect the district to continue to look at what options are available to continue to pursue receiving the appropriate share, what those options are,” he said.

FSSD board Chairperson Tim Stillings said while the additional revenue was set to be used for capital improvements, no educational programs would be in jeopardy despite missing out on the funds.

“Our programs are our secret sauce, and the programs that we offer for educating our students appropriately are not up for debate; they’re not up for negotiation,” he said. “We may not be able to build a building as fast as we would like, but there are no programs that would be in danger from not receiving this money.”

Snowden said the district is still working to determine how the loss will affect its plans.

“We’d have to revisit the priority list and say, ‘Okay, which projects may have to be put off a little longer because of not receiving this additional funding?”’ he said.  For now, the gifted revenue is out of the city’s hands and will be used by the county for school construction costs.

“Everybody’s got a need for money,” Anderson said. “It’s a matter of what pot it comes out of.”