Natasha Hendrix began working at Main Street’s McCreary’s Irish Pub as a server when it first opened in 2002, and just seven years later, ownership of the pub was passed to her when the McCreary family made the decision to retire.

“March 1, 2009, was my first day [as the owner]. It was a Sunday, I remember, and all the regulars came out,” Hendrix said. “I was starting from scratch, kind of like when you buy your first house, you put everything into it and you have zero dollars in your account, so it was a make-or-break thing for me.”

Since taking ownership of the business over a decade ago, Hendrix said she has striven to help the restaurant evolve by introducing cocktails and breakfast options and by making more of the menu items from scratch.

“I’ve changed some of the recipes—it’s taken me 11 years, and I just changed the shepherd’s pie recipe,” Hendrix said. “If you’re not constantly evolving in some ways, that’s when you become obsolete and die off. There’s always somebody who’s doing something different and bigger and better, but you just have to get good at what you do and make little changes here and there.”

Despite the slow changes introduced over the years, Hendrix said the pub has never sacrificed the comfortable community atmosphere or the quality of its food, making homemade Irish mainstays from traditional recipes, like Dublin fish and chips, and pouring a pint of Guinness the right way. 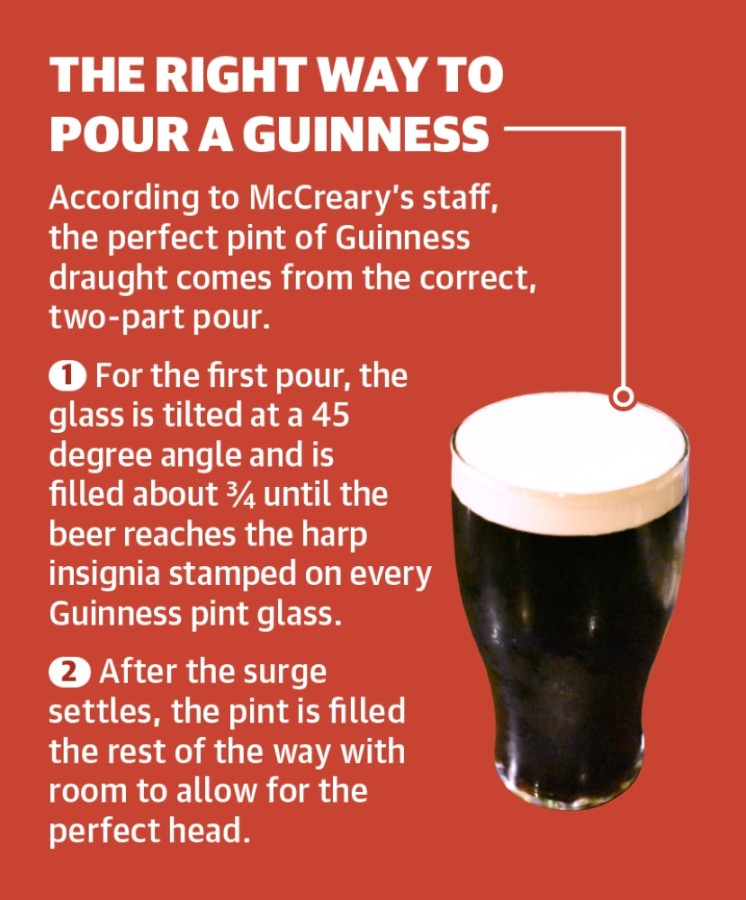 “A lot of traditional Irish pubs in Ireland are very casual, local and community-based, and that’s what we specialize in,” Hendrix said. “A lot of people say we’re like ‘Cheers.’ It’s very common to just pop in and see five people you know, so we’re the hangout spot. You can get grub, food and beer anywhere, but this is where people come to socialize.”

Like most restaurants, McCreary’s was hit hard by the effects of the coronavirus pandemic, with Hendrix having to temporarily lay off staff and limit the pub’s hours and services. Over the course of the dining area closures, she said the Franklin community is what has allowed her to stay open, and once McCreary’s reopened its doors April 27, the 50% capacity of the small pub was quickly filled with customers.

“The community is the only reason we’ve been able to keep doing what we’re doing,” Hendrix said. “The second the news came that dining was going to be shut down, I had so many people reach out and ask how they could help. ... Everybody has been scrambling to help.”

Despite the hardships suffered from the coronavirus as well as the way competition has increased in downtown Franklin over the years, Hendrix said McCreary’s Irish Pub has continued to provide Irish beer and food to the community that has kept them going for nearly 20 years.

“We’ve watched Main Street grow over the years and [seen] the revitalization of the Franklin Theatre. I was here waiting tables when it was run-down and closing shop,” Hendrix said. “We’re still the little fish in a big pond, but we’re always still standing. There are restaurants every other door now, but we’re still kicking.”