The site is near the Williamson County Ag Expo Center along Long Lane in Franklin. (Wendy Sturges/Community Impact Newspaper

The Nashville Predators may not bring home the Stanley Cup this year, but developers in the city of Franklin are looking to give future generations of hockey players a new place to train.

Earlier this summer, plans were presented to the public for the new, 25.17-acre Long Lane Sports Complex, set to be located at Long Lane in Franklin.

The complex—which is near the Williamson County Ag Expo Center and adjacent to the Ladd Park neighborhood—would offer a site for youth and adult hockey leagues and would be the only one of its kind in the area, with the nearest hockey facilities being the Ford Ice Centers in Antioch and Bellevue.

“There’s no ice in Williamson County; there’s no ice south of Antioch and Bellevue,” said Eric Kaehr, president and managing director of War Horse Venture Partners, the project developer. “If you talk to parents of kids that are currently in sports, especially in hockey, there’s the overwhelming need to have ice in Williamson County, and that has garnered a tremendous amount of support through parents in youth hockey.”

However, while the group has begun working with the city on the project proposal, Gamble Design Collaborative Founder Greg Gamble, who is working with War Horse on the proposal, said there is a long way to go before the project could become a reality, which will include hearing feedback from residents. A project start date will not be announced unless the project is approved.
RELATED STORIES

The city hosted a neighborhood meeting Aug. 6 to hear concerns from residents near the project site, a number of whom said they believe the project is too close to the residential area and does not fit within the city’s zoning plans. Gamble said the group is committed to working with residents to make the project work for the site.

“This is not fully planned out,” Gamble said. “We are interested in finding a place for these facilities in close, walkable distances to residential neighborhoods for the convenience of children and parents to have an activity center in close proximity to their neighborhoods so they’re not having to spend hours driving from their house to Antioch or from their house to other areas of Nashville.” 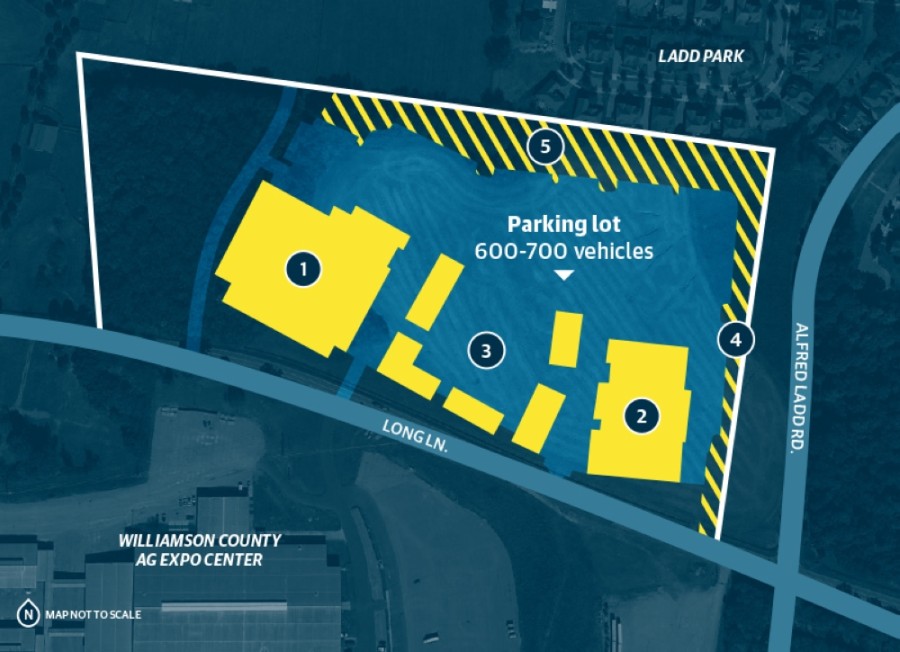 Preliminary site plans for the facility indicate the center could include a 100,000-square-foot hockey arena with two full rinks and one small rink for ice sports. It would also include a sports fieldhouse, office space for staff and parking for up to 600-700 vehicles.

Kaehr said during the meeting that after the A-Game Sports Complex in Cool Springs was closed and rebranded years ago, youth hockey players had no alternative than to go to Antioch or Bellevue to play.

“This is more of a passion project than a significant moneymaker,” Kaehr said. “Eighty-five percent of travel hockey kids live in Williamson County; they don’t live in the surrounding counties. It’s very difficult for parents to get to Bellevue and get to Antioch, and that’s something that we’re trying to solve.”

Developers have also proposed that the site could be home to some retail and restaurant spaces within walking distance of the arena, much like other mixed-use centers in the area. The center could also serve as a space for a number of other sports and activities, including cheerleading, gymnastics and basketball.

"We do see this as a high-end facility; this is a facility that’s going to be owned privately,” Gamble said.

One factor that has played a part in the development’s plan was how it will affect traffic.

If approved, the site would be located next to the planned Long Lane overpass, which will create a crossing over I-65 and connect Long Lane with Old Peytonsville Road. The project is the highest-ranked in terms of priority by the Franklin Board of Mayor and Aldermen and is slated to start construction in 2022, according to the city of Franklin.

"This becomes ideal from a development perspective because of the future flyover from Long Lane to mitigate traffic as well as its proximity to [I-65] to be able to funnel traffic in and out without seriously jeopardizing the neighborhoods around it with traffic overflow,” Gamble said.

Gamble said the project may warrant adding additional traffic lights, including one at Alfred Ladd Road, however no decision has been made on those.

Some residents have expressed concern regarding the facility’s location. The proposed site, which sits adjacent to the Ladd Park neighborhood, is zoned as single-family residential. Residents in the area say many people bought homes in the neighborhood with the understanding the rest of the land would be developed into more homes.

“We envisioned that maybe the corn fields wouldn’t be there forever, and that was always very sad to all of us,” Ladd Park resident Megan Thiel said. “But at the same time, we never, ever fathomed that something like this would take its place.”

Gamble said the site plans include a number of features to help mitigate noise and other disruptions the facility could bring. The site would feature plant barriers, including a 100-foot reforestation area on the back line of the property and a 25-foot landscape buffer near the roadway.

The complex is not the only nonresidential project planned for the area. The development proposal comes just over a year after the city approved a rezoning request for The Refuge Center for Counseling, which is also slated to build a new site at Long Lane.

Residents expressed concern the city is not following Envision Franklin, the city’s land use plan that was adopted in 2017 and is meant to help guide future development in the area.

“I’m more concerned about the probably half of the homeowners in Ladd Park and the surrounding neighborhoods that bought here with Envision Franklin in mind and in writing, and this seems to be just anybody that has a development idea that wants to come along can plop it wherever,” Ladd Park resident Patrick Kenny said.

However, city officials said Envision Franklin is only a plan, and is not the same as the city’s zoning ordinances and is subject to change as needed.

“The land use plan is guidelines, suggestions after much study by a lot of people. Everybody in town had an opportunity to participate because there were many, many public meetings. When you get to the zoning, that’s the law,” Ward 4 Alderperson Margaret Martin said during the meeting.

Developers said while they have begun working with the city, the project is in the early stages of development. Kaehr said the company is still completing revenue and traffic studies to determine the full effects the center could have on the area.

Following the community meeting held in August, the proposed plan will go before the city’s planning commission, which will determine if Envision Franklin’s plan for the site should be changed from single-family residential to recreational use.

However, to officially change the zoning for the site, the project would need to be approved by the Franklin Board of Mayor and Aldermen. A public hearing would also be held.

If approved, Gamble said the project could take about three years to complete, with the project wrapping up at about the same time as the Long Lane overpass.