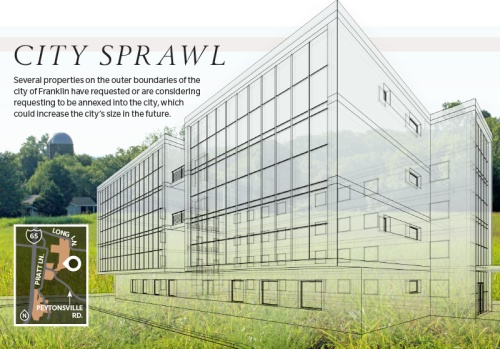 Areas near Franklin are marked for future growth, meaning developments like the example above could be on the horizon.u00a0

In south Franklin, a rash of annexation requests have set the ball rolling for future development in the area.

In July, The Refuge Center for Counseling, a nonprofit therapy provider, won approval in a contested annexation process before the Franklin Board of Mayor and Aldermen to create a new facility on Long Lane in south Franklin, but not without opposition from nearby residents on the grounds of protecting green space and keeping commercial development away from the residential area.

Greg Gamble, the founder of Gamble Design Collaborative, represented the Refuge Center before the BOMA and is working with many of the property owners who have requested annexation. He said the area needs more residential development, due in part to the mixed-use Berry Farms development, which is expected to drive job growth in the south Franklin area.

“Otherwise we’re looking at other cities around Franklin to house the residential that will support the growth of the commercial,” he said.

Annexation also allows a property to access city infrastructure, such as sewer services. Unlike the county’s systems, the city’s infrastructure is conducive to denser developments, such as neighborhoods and mixed-use developments, according to Emily Hunter, Franklin’s director of planning and sustainability.

“By being served by sewer, city roads and city services, they’re able to develop at a different intensity or density with different land uses than they would be able to in the county,” she said.

Gamble said that each property owner has different reasons for seeking annexation, but that the infrastructure capability provided by the city is a main benefit, as it can boost property values for new builds.

Annexation can only be done by property owners’ requests. Hunter said that makes predicting where growth will occur a bit difficult.

“It makes it difficult for cities to plan how their infrastructure grows over time when you’re at the mercy of property owners’ requests, but there’s also a lot of really good benefits to that as well,” she said.

Exact plans for the properties considering annexation are not yet known to the city, Hunter said. There is a series of steps between requesting annexation and breaking ground on a new project, a process that can take several years before building can occur, she said.

“This is really an area that I think we’re looking 10-20 years out for development,” she said.

Hunter said some homeowners are planning for the future rather than preparing to sell to developers soon.

“They’re requesting annexation because I think they see potential for the future of their properties. But they’re not necessarily ready to do anything right now,” she said.

Nearby resident Michelle Sutton said the annexation and planned development of the Refuge Center, which she opposed, prompted her to launch a run for an at-large BOMA seat in the city elections this fall. Sutton said she is concerned about the annexation of properties in the area near her home.

“If it annexes, is it appropriate for the properties around it, or for the surrounding infrastructure, to be then rezoned to commercial?” she said.

The area around Peytonsville Road, Long Lane and the Goose Creek Bypass is marked for short-term growth in city planning documents. That means its current capabilities for infrastructure are conducive to development in the near term, Hunter said.

“In terms of a technical planning standpoint, these areas are what we consider a high-priority growth area in terms of our annexation study,” she said.

Sutton said many people in her neighborhood want to preserve the area’s small-town feel.

“I believe that’s why a lot of people move here,” she said.

One area that has already begun the annexation process is Southbrooke, a 318-acre housing development in South Franklin currently going through annexation and zoning.

The earliest the property can be approved in its entirety is the Nov. 12 BOMA meeting.

The development will feature 749 units, 358 of which will be detached homes. Some lots are smaller than the city’s planning documents recommend, which drew some criticism from residents and officials.

Gamble said the project is one of many the city needs to offset outside traffic.

“When we grow as a city … as more office [development] comes in, if we don’t build supporting hotels and residential and all those kinds of things around Berry Farms, where are the people going to come from who work there?” Gamble said.

Of the 27 properties looking to be annexed in the future, 26 fall outside the city’s Urban Growth Boundary, a border drawn by the city about 20 years ago that shows where the city thought it would eventually grow, Hunter said. The UGB adds an additional 34 square miles to Franklin’s approximately 41-square-mile footprint.

Franklin has never annexed property from outside the UGB, Hunter said, which would require a referendum of the property owners before annexation.

For properties within the UGB, city staff reviews applications and makes a recommendation to the board.

Every annexation must go through a public hearing, which gives citizens the right to speak.

“I think the city does a good job at allowing people to speak,” Sutton said. “But I think we need to continue to allow the voices to be heard.”
SHARE THIS STORY