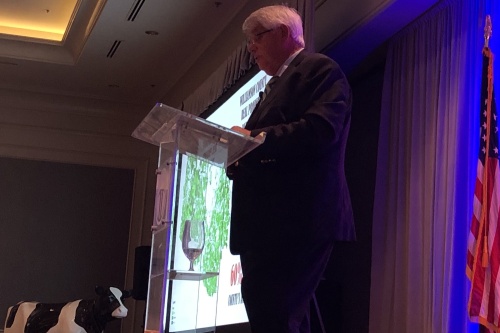 Williamson County Mayor Rogers Anderson updated a conference room full of business and community leaders on the property tax increase, educational impact fee and other county news at the State of the County event July 24.

Here are some of the topics Anderson covered in his speech:

In July, the county increased property taxes by 7 cents to fund Williamson County Schools’ budget for next year, which is over $626 million and includes a pay raise for teachers and enough funds to hire more than 150 new positions. An estimated 1,048 additional students will attend WCS in the upcoming year.

School officials originally told the commission an 11 cent increase was necessary to fund the budget, but an unexpected influx of state funds meant the county only had to raise the rate by 7 cents.

“Charles Sargent, for many years, was very instrumental in things that occurred up in Nashville,” he said, referring to the state representative who made those funds possible. “Through his efforts, before he passed away, he was able to take care of our school system.”

Each penny of the property tax rate represents just over $1 million in tax revenue, Anderson said. Of the county's budget, 73% goes to WCS and debt services.

The county mayor said more than $38 million has been collected since 2017 in educational impact fees, which are charged to developers who build in the area and are used to offset the cost of school construction. A group of building companies sued the county, suspending its ability to spend some of the funds for now.

The circuit court ruled in favor of the county, but the group of plaintiffs appealed, meaning the funds are still in limbo.

“If you moved here from Davidson County, we love you, ... but you’re going to pay more,” Anderson said.

Anderson also pointed out the county’s low turnout rate in local elections. Less than 15% of registered voters participated in Brentwood's and Franklin’s most recent local elections, according to his speech. He encouraged the crowd to participate in Franklin’s upcoming municipal elections as well as in the county revision of its growth plan for its unincorporated area.

“The planning department and a consultant have been gathering information and a great deal of input from citizens on how we want the future of our unincorporated area to look,” Anderson said. “Now is the time for your voice to be heard.”

Due to the county’s growth, Anderson said the workload for juvenile services and family court will continue to increase, and that facility upgrades are needed.

“A new facility will be designed to allow for improved privacy and safety, improved education and ... increased support space for staff,” Anderson said. “The commitment and leadership exhibited by the juvenile services and juvenile court is to be commended. They do a wonderful job with what they have.”

Anderson also listed some statistics on the county, including tourism and development numbers.