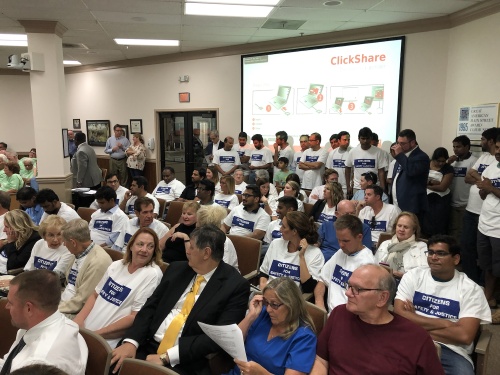 Many residents who live near the proposed site for The Refuge Center for Counseling on Long Lane expressed their disapproval for the center’s construction, while others made known their support for it.

A group of locals dubbed, “Citizens for Safety & Justice,” has consistently stated its opposition to the facility, stating concerns with increased traffic and its impact on green space in the area. The group has claimed it would reduce their property values.

“The issue is not the intended use of the commercial property, but rather it being rezoned as such,” said Michelle Sutton, a resident of Ladd Park, during the meeting.

Residents, employees and supporters of the center said that the benefits of the mental health center were worth the development and that it would be a positive addition to the area.

“We are going to be honorable neighbors if we are able to move forward with this project,” Refuge Center cofounder Jennifer Gillett said.

The project’s zoning, development plan, plan of services and annexation were all passed by the board, but will have to go through one more public hearing and vote.

Anyone who signs up before August 30 is eligible for a drawing to receive their bin for free, waiving the $4 per month startup fee, which is only charged for the first year, according to the city. The city is also giving away two tickets to the Pilgrimage festival in a drawing for early signups.

The city updated its food truck regulations, allowing ones with “location-specific mobile food permits” to stay overnight on private property, among other regulations.

“City staff has concluded mobile food vendors, when carefully incorporated into the fabric of a community, increases the vitality of public and private spaces, increases the number of local culinary options, offers an alternative for dining that otherwise require driving, and fosters opportunities for local entrepreneurship,” the memo accompanying the legislation said.
SHARE THIS STORY