contribute today
With the popularity of food trucks on the rise in the Greater Nashville area, the city of Franklin is working to regulate how mobile businesses can operate in the city limits.

City staff has been working over the past 12 months to compile clearer regulations around mobile food vendors, more commonly known as food trucks or trailers, according to Vernon Gerth, assistant city administrator for community and economic development.

“When we started this, we looked at other communities and what became most evident and recommended from all those communities ... is that you’re not going to please everybody, and when you adopt something by ordinance, look at it as a pilot program, and that’s what we’re recommending,” Gerth said.

Under the ordinance, food trucks would be allowed to operate in office, commercial, industrial and mixed-use districts. Operators pay an annual fee of $100 for permitting and must leave the site when not in operation.

The ordinance is similar to those in the surrounding areas of Brentwood and Williamson County, which do not allow mobile food vendors to stay overnight and allow them to only operate within certain areas.

However, if the vendor has a location-specific permit, it would allow the vendor to stay at one specified location without any time limits, provided that location is not within a flood plain, Gerth said. City staff cited concern that if a truck or trailer was left in a flood plain, there could be damage should a storm or floodwaters come through.

However, some business owners argue the flood plain requirement is too restricting. Tiny Little Donuts co-owner Mark Mogul, who operates his business from an Airstream trailer on Fifth Avenue North, said other cities, including New Orleans and Austin, Texas, have ordinances allowing the businesses to operate within flood plains and that the vehicles can be moved in the event of a flood.

“This industry is growing tremendously and rapidly, and there’s a huge demand for it,” Mogul said. “If I didn’t have a successful business where I’m sitting, I wouldn’t be fighting so hard to make sure that we can be here. I think this needs more work. Franklin is on the forefront in so many areas, and we’re looking at so many other cities that are starting to adopt this as it’s beneficial to the people that live there.”

The ordinance is expected to come up for for approval June 25.
SHARE THIS STORY 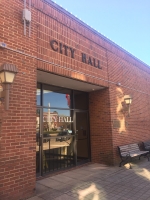