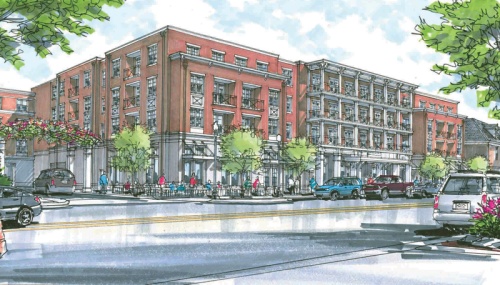 Residents in the area have likely noticed the large cranes at the corner of First Avenue and East Main Street constructing Harpeth Square.

Lynne McAllister said she remembers a time when downtown Franklin was little more than a few businesses and a hot spot for teenagers to drive around, sparking the need for the “No cruising” signs that still stand today.

Around the old “No cruising” signs now stand dozens of small businesses and restaurants that have helped make downtown Franklin a tourist destination, drawing more than 1.5 million visitors to the area in 2017, according to the Williamson County Visitors Bureau. The city’s population has also risen, climbing over 12 percent in the last five years, according to the U.S. Census Bureau.

With the growth showing no signs of stopping soon, city officials and private companies are working together to determine what the future of downtown Franklin will look like and standards for how future developments will be built in the area.

In late February, residents were invited to attend Planapalooza, a weeklong focus group aimed at finding what residents want to see incorporated in the city’s updated zoning ordinances, which are expected to be adopted later this year, according to city officials.

“The habitats that people are attracted to are changing,” said Brian Wright, founder of Town Planning & Urban Design Collaborative, a Franklin-based consultant on the zoning project during the session. “People are looking for places like downtown Franklin; however, we only have a little bit of that. How do we continue to be relevant in the future as people and preferences change?”

Aside from tourists, investors have also taken notice of Franklin and have been working to develop some of the last spots in the downtown area.

Residents in the area have likely noticed the large cranes at the corner of First Avenue and East Main Street constructing Harpeth Square, a 5.4-acre mixed-use development overlooking Harpeth River that, when complete, will feature 150 multifamily residences, 18,000 square feet of retail space and a 119-room Hilton Curio hotel complete with restaurants, a courtyard, a library and a ballroom. The development will also house a 591-space parking garage with access for public parking.

“Parking is a big issue down here,” said Russ Haynes, Harpeth Associates chief financial officer. “So we overbuilt the parking for multiple reasons.”

Harpeth Associates Chairman and CEO Roderick Heller said while construction on the project has progressed quickly since it began in October 2017, he has worked for more than five years to get Harpeth Square off the ground.

“The most important thing to keep in mind about this project is that we are investors; we’re not developers,” Heller said. “We think Franklin will be the geographic center of Middle Tennessee and, in many ways, it already is.”

Harpeth Square will host its grand opening in October; however, some amenities—including the hotel and apartments—will open in late July or early August, Haynes said. Two tenants—A Moment’s Peace Day Spa and Salon and Parks Realty—have already signed on to open in the development.

Heller, who is also a self-described historian, said the group has worked with the city to make sure the development will fit in aesthetically with the downtown area.

“We want to preserve Franklin,” he said. “We see this as a destination project, so we wanted to be special within the context of Franklin’s history.”

During the Planapalooza focus groups, many residents expressed concerns about the secondary effects of development, including rising costs of housing, traffic and parking availability.

McAllister said she believes while parking has become an issue for residents living downtown, the Harpeth Square development may help as tourists will be able to stay downtown instead of traveling into town.

Additionally, the increase in residents in the downtown area could increase demand for residential amenities, such as a pharmacy or market, she said.

“I think, for the most part, people are happy to have more residents in downtown Franklin because that’s going to bring more services and shops appropriate for downtown living,” McAllister said. “We have lots of fabulous shops for our tourists, but [they] do not necessarily give locals what they need.”

However, growth in the area is a top concern for residents. In the results of a city survey released in 2017, nearly a quarter of the 3,000 residents surveyed said growth was the No. 1 issue facing the city, even more so than traffic, cost of living and affordable housing.

Wright said while he recognizes that many residents do not wish to add to the area population, growth is a necessary function for cities.

“If we don’t let anyone new in and we’re all sort of aging … then the population’s going down and the cost of service is going up,” he said. “So, you might control the growth of the population, but your taxes will also grow.”

Following Planapalooza, Wright said TPUDC is expected to work with city staff to compile a draft of new zoning plans later this spring, which will be presented to the public before being considered for city approval.

City officials said the plan is expected to be brought to the Franklin Board of Mayor and Aldermen this fall.

Wright said the highest priority for most residents so far has been preserving the character of Franklin.

“The No. 1 thing we heard that people agree on, [is to] protect the character of Franklin,” he said. “That character is important as you start thinking about the zoning because you don’t just want to homogenize it and have everything be the same as down the highway.”
SHARE THIS STORY