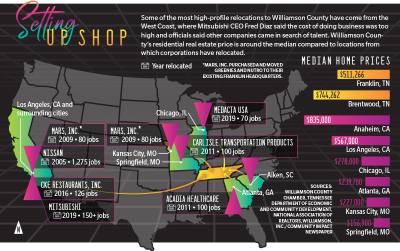 Williamson County has become a hotspot for big-name employers, and officials have been working for years to get the area to where it is today.

Since 2015, the Tennessee Department of Economic and Community Development has helped nearly 30 companies relocate to or expand within Williamson County. Those projects have combined to create over 4,000 jobs and enable about $400 million in capital investment, according to the department.

State and local officials said the majority of recent investments and jobs created through economic development programs has come from retainment, not recruitment, although both have played a role in the growth of Williamson County’s economy.

“This has been 10 years in the making,” TNECD Commissioner Bob Rolfe said.

Mitsubishi Motors of North America is the latest major recruitment to Franklin. The company announced in June it would relocate its headquarters from Cypress, California to Franklin, and some of its employees began working in a temporary location in Cool Springs in August.

“We knew that we needed to leave California because the cost of doing business here is just really, really tough,” said Fred Diaz, CEO of Mitsubishi Motors of North America.

Local and state officials chalk up the county’s status as a hotbed of corporate headquarters to the area’s business-friendly tax climate, relatively low cost of living, high quality of life and ample availability of local talent.

Elizabeth McCreary, director of economic development for Williamson, Inc., said companies are chasing skilled workers, of which Williamson County has a high supply.

“Today, people choose a location based on their own criteria for quality of life,” she said. “The result is companies are now following the talent.”

Diaz said he had positive prior experience with the local workforce when he was an executive with Nissan, and Mitsubishi plans to hire more than 150 people at its new headquarters.

“I never had difficulty finding a good-quality local hire to fill some of the really sophisticated technical jobs that I had,” he said.

Local officials work hand-in-hand with the TNECD to recruit companies to the state in efforts to create jobs and economic opportunities.

Phoenix, Dallas and Denver were also in the running for Mitsubishi’s new U.S. headquarters, according to Diaz.

Though headquarters are a priority for the state, according to Rolfe, both local and statewide officials also want to promote “industry diversity,” McCreary said.

“We need only look at communities like Detroit to see the devastating effects of a single-industry dependency,” she said.

While relocations often get a lot of attention, McCreary said a majority of local resources go to retaining businesses and helping them expand rather than to recruiting new companies.

“With 90% of our job growth coming from existing businesses, the majority of our efforts are directed towards the retention and growth of the companies already located here,” she said.

State data from TNECD shows the same trend. In the last five years, nearly 70% of TNECD grants in Williamson County went to companies looking to expand and stay in the area.

For example, Red Collar Pet Foods announced in July the company would expand its local operations to the tune of a $3.65 million investment and 30 new jobs. Company spokesperson Roman Goloborodko cited the same factors that relocating companies say attracts them to the area.

“This is a great location and area to attract talent,” he said.

McCreary and Rolfe agreed that the county and state should keep seeking job growth through recruitment and retainment.

“I tell our guys, ‘I want to keep the foot on the gas every day,’” Rolfe said. “Because when a recession does arrive ... I want us to have the most companies we can have in the barn, so to speak, so that when we have a recession, it will be maybe less severe because we have such a great group of companies that call Tennessee ... home.”

One tool state and local governments can use to promote business activity is tax incentives, which can come from the state, city or county level.

Typical state-level agreements allow a company to receive grants, but the company must hold up its end of the deal by hiring a certain number of new employees in the area.

One such grant includes upfront dollars to help with relocation costs, as with the $2 million economic development grant Tennessee gave to Schneider Electric back in 2016.

Another form of grant allows new and expanding companies to train new employees, like the $132,000 medical supply company Medacta USA received earlier this year. These agreements contain provisions allowing the state to end the agreement if a company fails to do its part.

“They’re reimbursable dollars, so they have to turn in receipts,” he said. “We don’t just send them a blank check.”

On the local level, incentives allow companies to pay a lesser percentage of their property taxes, McCreary said. Because the move of Mitsubishi’s headquarters has not yet been finalized, it is not yet clear how much the company’s local incentive package would include.

However, McCreary said the more than 65% of property taxes that go to fund Williamson County Schools is not on the table for companies seeking tax breaks.

“With our public schools being our No. 1 economic driver in Williamson County, we start every incentive conversation by letting the company know we will not abate taxes dedicated to our schools,” she said.
SHARE THIS STORY

Parking, shuttles and COVID-19 precautions: What to know before heading to this year's Pilgrimage Festival in Franklin, Sept. 25-26

Find information about parking, food and what is allowed inside festival grounds.

Both Williamson County Schools and Franklin Special School District have extended their mask mandates for students and staff.

Early voting in the city of Franklin begins in less than 3 weeks, are you registered to vote?