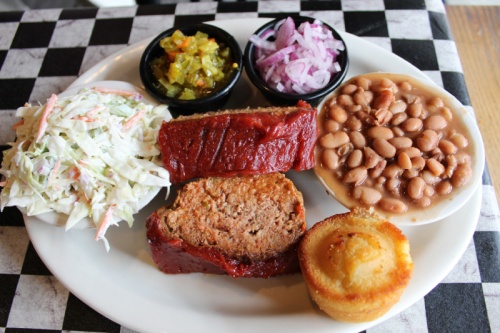 A large portion of meatloaf ($10.49) is served with a choice of two sides, relish and a cornbread muffin.

For the last 18 years, owner John Craighead said Vittles has served the food he knew best—the home cooking he grew up with.

“I knew what home cooking was like because that’s what I was raised on,” Craighead said. “My mom was a really good cook, and I thought, ‘I’ll give it a try.’”

The Brentwood restaurant, located on Thoroughbred Lane and Old Hickory Boulevard, serves a number of American and Southern classics, such as meatloaf, Southern fried chicken, chicken and dumplings, and chicken salad as well as housemade cornbread muffins and sides. Many of the same dishes are served at the eatery’s Donelson location, which is run by Craighead’s son.

“We have really good home cooking; it’s our trademark,” Craighead said. “I’d put it up against anybody’s.”

Vittles serves lunch and dinner on weekdays, as well as breakfast on Fridays, Saturdays and Sundays. Craighead said diners can also find the eatery’s signature breakfast buffet on weekends, featuring all-you-can-eat breakfast foods as well as an omelet station for $10.99 per person.

The restaurant also offers catering and has partnered with Fooda, a program that works with area employers to bring lunch options to offices and workspaces.

The eatery sells goods from Spring Valley Farms, including clover and wildflower honey; fruit preserves; and hot and mild varieties of Chow Chow, a pickled relish made with a mix of vegetables.

Craighead said over the years the eatery has seen a number of country music singers come in, such as Alan Jackson, Reba McIntyre, Faith Hill, Tim McGraw, Trace Adkins and Hank Williams Jr., many of whom have left autographs that Craighead has saved.

“When we first started, we would get a lot of the country music stars that lived out here,” he said. “If you’re in a place long enough, you never know who’s going to come through here.”