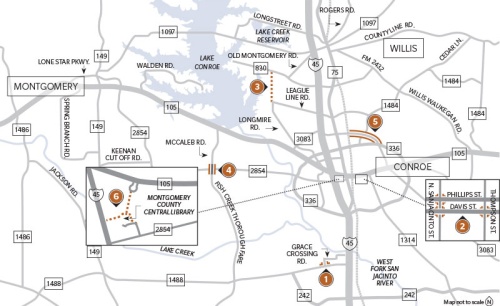 The city of Conroe recently completed a project to add a traffic signal at the intersection of Grace Crossing Road and FM 1488.

4. McCaleb Road overpass expansion
Montgomery County is waiting to obtain permits before it can bid out a project to build a second overpass over FM 2854 and the BNSF Railway tracks to serve as northbound lanes for the corridor. The existing overpass will serve as southbound lanes.

5. FM 3083 widening
Phase II of a Texas Department of Transportation project to widen FM 3083 and add a median from the Union Pacific Corp. railroad to Loop 336 North began Nov. 12.
Phase I, which is 67 percent complete, builds a bridge over the railroad tracks.

6. Freedom Boulevard creation
This project, 77 percent complete, will allow visitors to access the upcoming Veterans Memorial Park in an extension from the I-45 access road to FM 2854.