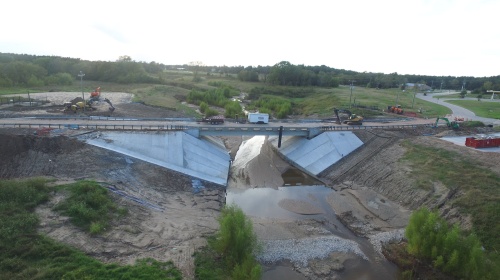 Buffalo Springs Drive bridge nears completion, with the contractor aiming for an Oct. 31 completion. The drone photo shows the bridge on Oct. 21.

Montgomery City Council met Oct. 23 to discuss and take action on numerous agenda items, including an update on Buffalo Springs Drive bridge repair, a water and sewer rate increase and an increased recycling fee. Council member John Champagne was not in attendance. The last pieces of the project include testing the repaired water line, connecting across the bridge and one more concrete pour on the slopes of one of the sides.

3. Council awarded project bid for Baja Road and Martin Luther King Jr. Drive
Council voted to approve a $179,213 bid from Boretex, LLC for the construction of water and drainage improvements on Baja Road and Dr. Martin Luther King Jr. Drive. Roznovsky said the project will improve and replace water lines, replace and upsize culverts, and add slope pavements to better drain the area. Construction on phase one is anticipated to begin on Nov. 31 and end 60 days later.

A second phase for the roads—which will be funded by the Federal Emergency Management Agency—will include repaving Baja Road. Roznovsky said phase two will begin once FEMA funds are acquired.

4. New recycling, trash rate to begin Nov. 20
Council unanimously adopted an ordinance for the city’s new garbage and recycling rates, which will become effective Nov. 20. The ordinance reflects the council’s decision to approve the contract with Waste Management in July.

“One-third of the city residents won’t see any increases because they use less than 50,000 gallons,” said Council Member Rebecca Huss. “So none of the rate increases over the last three years have affected one-third of our residential consumers.”