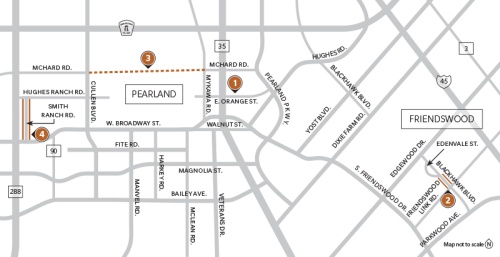 Here are four transportation project updates for the Pearland and Friendswood area for July.

Construction on packages 1 and 2 of the Linwood, East Orange and Old Alvin Drainage and Roadway Improvement project was completed early in May. The original deadline was October 2018.

The city of Friendswood began reconstructing portions of Blackhawk Boulevard on June 18. Those who live between Edenvale Street and Friendswood Link Road will receive more information when construction is near their home.

The city of Pearland has sent 13 offers of right of way acquisition out of 75 total properties identified. The city has also received notice from the Environmental Protection Agency that wetlands around McHard Road need to be mitigated before construction.

The design portion is underway for a four-lane divided concrete roadway with curbs and gutters, and raised medians. The project goes out for bids in November.