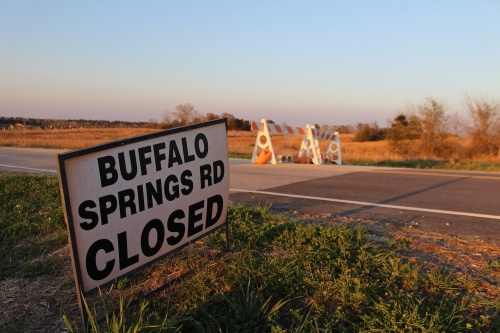 Montgomery City Council met Tuesday evening to take action on numerous agenda items, including renewing recycling services for the city and a resolution to the Texas Department of Transportation outlining the city’s priorities for the FM 149 project. Council members also received a project update on the Buffalo Springs Drive bridge repair.

Mayor Sara Countryman was not in attendance; therefore, Mayor Pro Tem T.J. Wilkerson moderated the meeting.
1. The council approved increase in recycling fees
Council members unanimously approved that the city renew its contract with Waste Management of Texas for recycling services, which includes a rate increase and an upgrade to larger storage containers.

The city approved a three-year contract with Waste Management at a new monthly rate of $19.10 per household, which includes a 27 cent increase to the standard collection rate, as well as a 25 cent charge for the city to upgrade from 18-gallon recycling bins to 96-gallon recycling carts.

Terry Woodson, public sector solutions manager for Waste Management of Texas, addressed City Council members at the meeting and presented several options for renewing the city’s recycling contract. Woodson said that roughly 35 percent of Montgomery residents use the recycling service. She said the 96-gallon recycling carts reduce the contamination of materials in the container, because the lid is attached to the cart.

In the resolution, the city made the following requests:

"We should have an inclusive approach to planning," said City Council Place 4 Rebecca Huss. "Part of the point [business owners had] is, don't spend money to help mitigate loss of business without including the businesses in [planning], because if we’re spending money on something that’s not going to help them, we’re wasting money."

Construction on the bridge began in January, after city officials had worked to secure funding from the Federal Emergency Management Agency to repair the bridge.

At the June 12 meeting, council members approved an amendment extending the repair contract to July 24. However, due to poor weather days surrounding the July 4 holiday, contractors are now estimating a mid-to-late August completion date, Roznovsky said.

"We are evaluating the actual impact days, so what is due to weather and impact days and what’s slow progress," he said. "Once we evaluate those days, we’ll bring another contract to council and recommend approval of [however many] additional days."