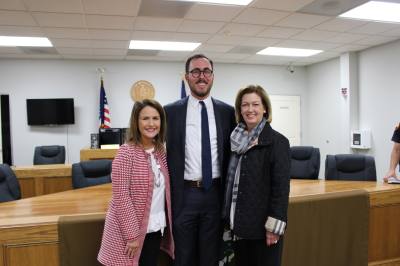 Stay in the know with these updates on city and county meetings, road closure updates and candidates who filed for the upcoming primary election. Richmond commissioners will meet for a regularly scheduled meeting at 4:30 p.m. Monday. Items on the agenda include presentations on the Upper Rabbs Bayou Watershed Master Drainage Plan and considering a resolution to add additional acreage to the West Fort Bend Management District.

At a Development Corporation of Richmond meeting Dec. 12, a new executive director was appointed. Cameron Goodman will be officially announced as the new director at the city commission meeting, according to city officials. 3. Highway 99 southbound lanes at the Stavinoha Bridge now open
All lanes on the Grand Parkway at the Stavinoha Bridge over the Brazos River are officially open as of Dec. 16, according to the Fort Bend County Toll Road Authority. Grand Parkway northbound lane closures began in late October after it was confirmed that the bridge needed $17 million in repairs to stabilize the northern bank. Officials from the FBCTRA confirmed the repairs will continue into February 2018, but there will be no more road closures. 5. LCISD board of trustees to meet Thursday
Lamar Consolidated ISD’s board of trustees will meet for a regularly scheduled meeting at 7 p.m. Thursday at the LCISD Administration Building in Rosenberg. Agendas are posted online prior to the meeting. Open to the public.