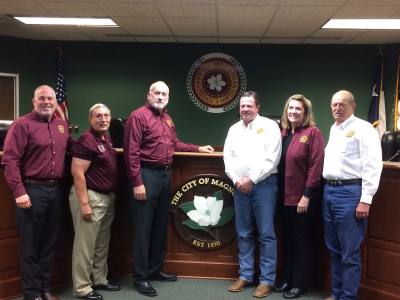 "For the institutional and commercial [users], it should be instituted next month," Mayor Todd Kana said. "We still need to discuss the residential [rates], but I don't think we're a month or two or three or four or five [months] away from changing that."

The city of Magnolia is working to adjust water and sewer rates for the first time since 2005 to keep pace with the rising cost of water production and treatment, officials said previously.

3. Police department to purchase new vehicle
Council members approved the purchase of a new Chevrolet Tahoe vehicle for the Magnolia Police Department on Tuesday. The MPD is working to replace an aging vehicle with nearly 180,000 miles. The new vehicle is estimated to cost $32,000, and equipment from the old vehicle will be transferred over to the new Tahoe to ensure cost savings, Police Chief Terry Enloe said.

4. Unity Park dam repair underway
Bob Schmidt of O'Malley Strand Associates presented a plan to repair a dam at Unity Park to the council on Tuesday. The company is working with the city to repair the former dam to mitigate flooding in the area. Schmidt said the dam will be reconstructed as an earthen berm reinforced by concrete.

The project, which will be partially funded by the Federal Emergency Management Agency and other flood mitigation funding from agencies, is expected to go out for a construction bid in early 2018 and be completed by October.