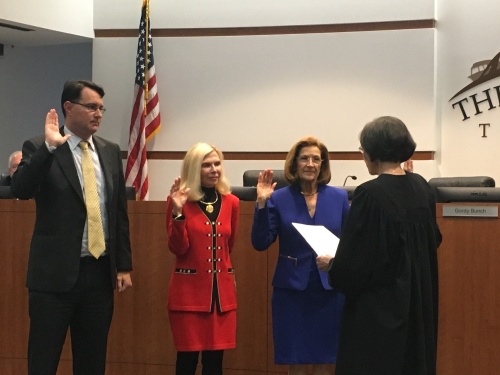 From left: Township board directors John McMullan, Ann Snyder and Carol Stromatt were sworn in during last night's meeting.

Last night's meeting of The Woodlands Township board of directors was a busy one. Here are eight agenda items residents need to know.

At the beginning of the meeting, Carol Stromatt was sworn in to her position on The Woodlands Township board of directors alongside directors Ann Snyder and John McMullan, who ran unopposed in the November election.

"We’re up to 33 agencies represented in the task force," he said. "This is the only place that everywhere is at the same room at the same time, so there’s a lot of progress behind made."

Rieser said the group is still waiting to hear feedback on a request for federal funding for a flood study in Montgomery County. He said with the high volume of hurricane damage across the county, funding assistance will likely be spread thinly and there is no estimate on how much a solution to the area's flood issues will cost.

"It’s a huge, huge project and we’ve taken the task force [meetings] from quarterly to monthly and I expect that will continue until we get some answers," he said.

3. Sales tax rises for November despite retail lags
While recent reports show sales tax revenue in The Woodlands is higher than projected for the fiscal year, retail sales tax revenue is down 4.3 percent, said Monique Sharp, assistant general manager of finance and administration.

Sharp said this number is concerning as retail sales make up approximately 50 of sales tax revenue sources in the township. However, revenue has risen in other areas, like manufacturing.

4. The Woodlands Township recognized for National Night Out event
Township General Manager Don Norrell recognized public safety officials, first responders and community leaders for their work during last month’s National Night Out. Norrell said the township ranked No. 1 in participation out of 23 comparably-sized cities, including Plano and St. Paul, Minnesota.

Leaky has served the village association for 15 years and said he will stay on until a replacement can be found.

7. Incorporation work continues
The Woodlands Township has received over 20 proposals to date for a potential study on what it would take for the township to incorporate, according to township staff.

Township staff is expected to work with board members throughout December to narrow that number down before hearing presentations from consulting firms Jan. 4 at 4 p.m.

Directors called for existing committee members to be more transparent with decisions. Recent complaints include lighting issues at St. Anthony of Padua and a home in Grogan’s Mill Village that has been undergoing remodeling work for multiple years.

The township board will make appointments to the committee during the next regular meeting.