INTERACTIVE: Hwy. 290, Grant Road and updates on other road projects in Cy-Fair 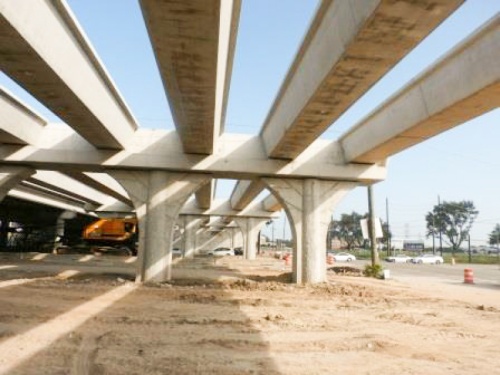 Project E involves widening Hwy. 290 to five mainlanes in each direction from North Eldridge Parkway to Hwy. 6 and four mainlanes from Hwy. 6 to Telge Road. Crews in October continued work on westbound mainlanes and the approach from North Eldridge Parkway as the highway rises over FM 1960. Crews are pouring soil first, which will be followed by asphalt, rebar and eventually concrete. The westbound lanes are expected to be completed by spring 2018, at which point work will begin on eastbound lanes. Following that, officials with the Texas Department of Transportation said crews will begin working on FM 1960 and Hwy. 6 frontage roads and an eventual Hwy. 290 overpass over FM 1960. The project is about 54 percent complete.

2. Grant Road widening
Construction is underway on a Grant Road widening project from Old Kluge to Spring Cypress roads in Cypress. The Harris County Precinct 4 project will widen the road from a two-lane asphalt roadway to a four-lane concrete boulevard. Harris County Precinct 3 is also widening the road from Old Kluge Road to Lakewood Forest Drive in Cypress.

4. Cypress North Houston Road widening and extension
Harris County Precinct 4 is acquiring right of way for a project to widen Cypress North Houston Road from Jones Road to where it ends at Perry Road and then extend it through to FM 1960 as a four-lane concrete pavement section. Officials hope to send the project out for construction bids in the second quarter of 2018.

Project D
After utility relocation issues caused some delays to Project D, from Telge to Mueschke roads, crews have begun working on westbound mainlanes between Cypress Rosehill and Skinner roads, which are expected to be completed by summer 2018.

Project J-2
Eastbound mainlanes along Project J-2, which runs from West 34th Street to the Loop 610 interchange, are expected to be completed by Thanksgiving. Crews will work on westbound mainlanes next, followed by new ramps connecting Loop 610 to Hwy. 290.

Project C-2
Crews are working on the westbound side of Project C-2, from Mason to Bauer roads, including mainlanes west of the Grand Parkway. Work will be completed by fall 2018.