5 construction projects to watch in Franklin, Brentwood this month The next phase of construction on Hill Center Brentwood is underway.

Construction on Phase 2 of the Hill Center Brentwood development is underway, and structural work is ongoing. The 84,000-square-foot office building near Maryland Way and Franklin Road is expected to open in early 2020, according to a spokesperson for HG Hill Realty Co. Plans for the $211 million project were approved by the city of Brentwood in early 2018. Phase 1 includes a number of retail shops and eateries, including Uncle Julio’s, Del Frisco’s, Fab’rik and The Fresh Market. Confirmed tenants for the next phase include State Volunteer Mutual Insurance Co. as well as others expected to be announced later this summer. Also in the plans are a 148-room AC Hotel by Marriott and two office buildings that add up to just less than 20,000 square feet of retail space. A two-story, 315-spot parking garage is under construction as well. Once completed, the entire development will total about 600,000 square feet. The city of Franklin began work in July to build eight new tennis courts in Jim Warren Park, located at 705 Boyd Mill Ave., Franklin. The city expects to have construction on the courts completed by late September or early October, according to Parks Director Lisa Clayton.

Residents can expect to see construction equipment at the park during construction, and the courts will need time to cure before they can be used, Clayton said. Williamson County’s newest elementary school will open in January at 4239 Gosey Hill Road, Franklin, according to Superintendent Jason Golden. As of July, 75% of building framing and roof work was complete, and all of the building’s concrete floor slabs had been placed. Construction on the new Chickasaw Senior Community, a 48-unit public housing project for senior residents, is underway at 600 Chickasaw Place, just south of Boyd Mill Avenue in Franklin. The $9 million project constructed by the Franklin Housing Authority will create a three-story building slated to be completed by the end of the year.

Work on a three-story classroom building addition to Page Middle School, located at 6262 Arno Road, Franklin, is nearly complete. Construction workers are in the process of adding window frames and painting, according to a July announcement from Williamson County Schools. The expected completion date for the addition is Sept. 16. 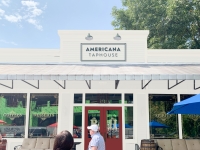