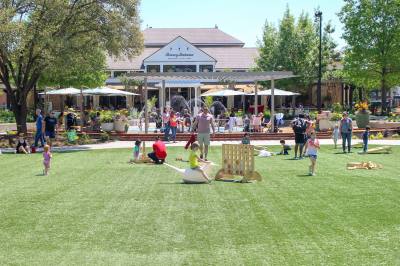 Development projects underway around The Woodlands area include a sportsplex, office buildings and a new residential complex. 1. Construction is underway for the Palmetto Homes-developed Centro community on the David Memorial Drive connector to Hwy. 242. The homes in the community are anticipated to cost between $300,000 and $400,000 and will be within walking distance of Metropark Square, according to Palmetto. The developer has said homes will begin to open to residents in the summer. 2. Renovations to Market Street in The Woodlands were completed April 22, which include synthetic turf, new seating areas, new lighting systems, and an interactive water feature and deck, according to Trademark Property Company. 3. Construction is underway on The Woodlands Sportsplex on Gosling Road. RS Investment Group is developing the site, which will be used for a variety of sports and strength training facilities, according to the company. The project is anticipated to be completed in mid-July. 4. Construction continues on Moviehouse and Eatery on Kuykendahl Road, which broke ground Jan. 30. The theater is slated for a November opening, according to the Howard Hughes Corp.