What's being built over there? Projects to know about in The Woodlands area 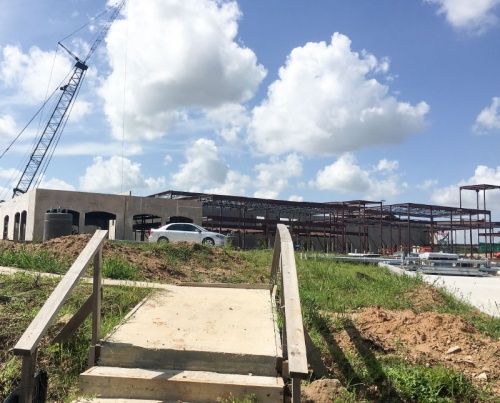 Framework has been constructed on Cathedral Lakes, a 150-acre development near Grace Woodlands Church on I-45 North near Rayford Road.

Several commercial developments are under construction in and around The Woodlands area. Work is continuing on the MetroPark Square mixed-use development along I-45 North in Shenandoah. Since early 2018, developer Sam Moon Group has added new roadways and driveways to the center, which will be anchored by an AMC-10 movie theater. AMC officials did not respond to requests for comment on when the theater may open. Lake Woodlands Crossing, located at Lake Woodlands Boulevard and Grogan’s Mill Road, is expected to open to tenants this fall. Tenants for the development include Ulta Beauty and Total Wine & More. A new retail center is under construction at the northwest corner of Woodlands Parkway and Terramont Drive. The new center includes several pad sites, as well as a Dairy Queen location, which opened in late July. Framework has been constructed on Cathedral Lakes, a 150-acre development near Grace Woodlands Church on I-45 North near Rayford Road. The mixed-use development is expected to include a hotel, a medical complex and Northside Lexus car dealership. Construction is slated for completion in 2022. Marcel Town Center is a 70,000-square-foot retail development located near FM 1488 and Old Conroe Road across from Del Webb The Woodlands. The center is slated to open to tenants this fall. Harmony Commons, a 19,200-square-foot development located near the corner of the Grand Parkway and Discovery Creek Boulevard, began construction in summer 2017. Tenants include a new location for Mod Pizza—which opened in early August—as well as a second location for Robichaus Jewelry and a Chase Bank, which is slated to open in late October.