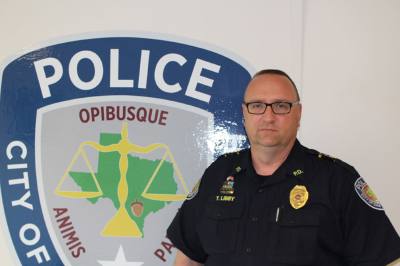 Tom Libby, a veteran of the Oak Ridge North Police Department for nearly 26 years, became the city’s newest police chief in January. He spoke with Community Impact Newspaper to discuss his history in law enforcement and views on the Oak Ridge North community. The interview has been edited for length and clarity.

How did you get into this profession and come to Oak Ridge North?

When I got out of the Marine Corps, I knew I wanted to be a policeman. ... After graduating [from the Houston Community College Police Academy], I just started looking for a job and just happened to be thumbing through the classifieds, and I saw this ad at the bottom of the page, maybe three lines, and it said ‘Oak Ridge North Police Officer.’ And I had to get out my map to see where Oak Ridge North was at; I knew about The Woodlands, but never Oak Ridge North.

What has kept you here for more than two decades?

Honestly, I was hungry for a job, and at the time Oak Ridge was hiring three officers. They were expanding [and] planning for growth, so they hired three of us. And not too long after getting hired, I was asked, ‘How long do you plan on staying at Oak Ridge?’ And my answer was ‘As long as I’m happy.’ And I’ve been happy for 26 years. I thought about going to a larger agency once, but that was probably after being here for about five years maybe, but never had the thought of leaving. A lot of us officers that have been here for a long time treat the city [as] more of our home, and we take keeping the city and its residents and visitors safe [personally]. … The city’s been very good to us.

How was your transition from the role of lieutenant to police chief this year?

I had a very good mentor [in former Chief Andy Walters] and probably 15 years ago ... he asked me one day, ‘Where do you want to see yourself one day at the city?’ And my response was to be sitting where he was sitting, at the chief’s desk. Probably from that point on he started mentoring me, and I couldn’t have asked for a better mentor. As far as the transition goes, it was very smooth. ... What’s also made it smooth is our current city manager, Richard Derr, was the city manager—actually, city administrator was the title then—when I first started here back in ‘93. So knowing Mr. Derr, and him knowing me, it was a very smooth transition.

What is the main policing focus in Oak Ridge North?

Our main concern and issue is, because we’re so close to Harris County and so close to Houston, we get lots of the crime that comes up from the north side of Houston, Harris County. They will rob and steal along the I-45 corridor through us, through Shenandoah, then head back south home. That is our major concern, is mostly property crimes. … That is our No. 1 priority, and it’s always been a saying here at Oak Ridge that the residents, when they go to work in the morning and they come home in the afternoon, they want to see their property still at their house. When they go to bed at night and they wake up in the morning, they want to see their property still at their house. We take that very seriously, and we try to do our best to thwart crime at our so-called doorstep before it gets here.

What is appealing about the Oak Ridge North Police Department?

It’s a small agency; there are 17 of us total. ... Good thing about it is, everybody here’s like family. Everybody knows pretty much what’s going on in everybody’s life as far as their kids, family, what’s going on, and I think that makes a real tight bond between the officers and it helps establish that community-style policing. … We are a problem-solving police department.

Do you have any future plans or changes in mind for the department?

As far as the future, we’re going to continue to try to do these community outreach programs, these community meetings. ... Going forward, I guess it all depends on the economy and the growth in the area. There’s some projects that down the road, depending on what happens with those and in the foreseeable growth in the city or expansion back east, we’ll just have to see what happens as far as any new officers, expanding the police department.

Is there anything else you’d like people to know about the department?

As of right now, we’re going to keep going forward and just continue to do what we’ve always been doing. And that’s to—I hate using this phrase—‘fight crime’ and educate the public. And we hope to continue to provide the best law-enforcement service that the citizens of Oak Ridge North expect and deserve. And I know that each officer here has that same theory, thought and concept.