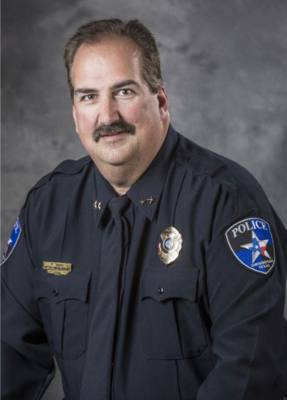 Shenandoah’s Raymond Shaw has been chief of the city police department since 2016 when he was appointed to the position after his predecessor retired. Shaw has worked in Shenandoah for more than 20 years. This interview has been edited for length and clarity.

What is your history in law enforcement? How did you get started?

I got started with law enforcement in 1986. I went to the academy in Montgomery County, and then I got hired on in the jail at Montgomery County. I immediately transferred to patrol and worked for the county until October 1997 when I came to work here [in Shenandoah]. I always wanted to be a police officer.

Was it your original plan to become chief of police?

That wasn’t my original plan. Honestly, I just like being a police officer. This is what I enjoy, and this is really all I’ve known since I got out of high school and went to the academy.

What has kept you in Shenandoah, and what does it mean to you to be chief of the police department?

It’s the community—the community here is like family. I’ve ... known them for a long time. They treat you like you are part of their family. When I got hurt here in 2010 [by an all-terrain vehicle fleeing police], my phone didn’t stop ringing from people asking what I needed. This is the best community I’ve ever been a part of. It means the world to me [to be police chief]. Now I’m here, and I’m in a place where I can create change to make a difference in some people’s lives and build a better relationship between people [and the police department]. That’s what our lives are all about.

What do you consider your proudest moment in law enforcement?

It’s kind of hard to say the proudest moment. There have been several really good moments. I was a detective for 12 years, and whenever you have a really big case and you get an arrest on it, it makes you feel really good to do something good for the community. ... We’ve [also] had some moments … on patrol when we went to a house where there was a child who was in distress because she couldn’t breathe. We got her breathing again and got her to the hospital. We found out the parents had lost three children before her … We went back by there a few years later and the parents actually thanked us. They had lost children before her, and now she was out trick-or-treating, so that was a good moment.

What has been your most challenging moment?

Moving forward, what are your plans for the Shenandoah Police Department?

Our biggest plan here is that as we grow, we want to continue to have the community relationship we have now. We had a Coffee with Cops [on April 23], and we’ll continue to do these community-oriented programs. We’re planning a huge safety awareness program where we’re going to invite other law enforcement, fire departments and emergency medical services all around us to come.

It’s not just for Shenandoah residents; it’s for everybody. We want them to see what resources they have available in our area, and we want to get the kids out so they’re not afraid of the police because most of the time they see police officers, it’s only when something bad is happening. We want the kids to see the police in a good light, ... so we’re going to keep planning things so there is a friendly atmosphere around us [and] so they’ll approach and engage with us instead of [us] just coming in, arresting somebody for something bad and leaving.

That’s what we want to continue here in Shenandoah. Hopefully, some of the younger people will want to grow up and be police officers, grow with their community and help their community just like I did. The way I looked at it when I was a child, if I saved one person, I did something really good. Now, if I can save two, three or four people out of jail and keep them in the community doing right, we’ve really done something special.