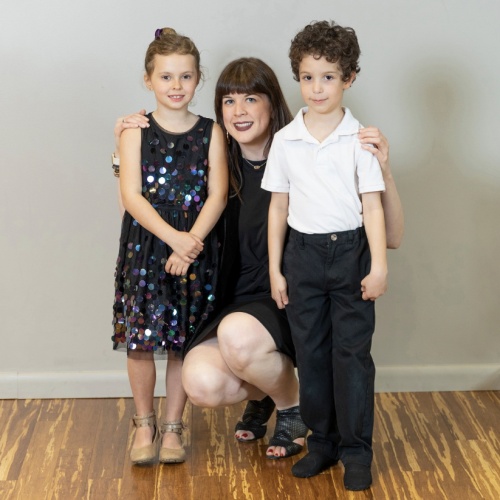 Anna Schlueter, left, and Braden Gill, right, are among the students participating in Dancing Thru Life with director Elizabeth Porter.

After getting its start in Brownsville, nonprofit Dancing Thru Life has expanded to offer its services of teaching at-risk students the benefits of ballroom dance in The Woodlands area in Conroe ISD.

Director Elizabeth Porter said the organization focuses on building confidence and social skills for students who participate in the after-school program. Dancing Thru Life came to Glen Loch Elementary in late 2017.

The 30-session program teaches students how to dance in a variety of styles, and Porter said the partnerships required to perform the dances help students in first to 12th grade learn how to work together.

“It also teaches them culture,” Porter said. “I don’t know how many first-graders are used to Frank Sinatra, but when we’re dancing foxtrot, that’s what we are listening to. [There is] also Latin music and big band music.”

Porter said programs often fit within a school’s curriculum and can be customized to fit the needs of students.

Along with teaching students, Dancing Thru Life offers a way to get teachers and parents involved. Porter said each school’s group relies on volunteers, and prior to orientation in September, the organization holds a class to teach the teachers.

“We ask those volunteers to be a part of this, and they teach the kids,” Porter said. “Imagine a parent being able to share an hour a week with their child learning ballroom dancing. ... It’s such an opportunity that does not exist in today’s world.”

Throughout the year, participants in Dancing Thru Life work toward a competition called the Kids Challenge. This will be the first year for schools in The Woodlands area to be taking part, and the event will be hosted at College Park High School in November.

Dancers will also be taking part during the region’s Children’s Festival, where they will be featured at the Cynthia Mitchell Woods Pavilion in performances Nov. 9 and 10.

“It’s an incredible opportunity for the kids,” Porter said. “Some of them would never have the opportunity if it was not for Dancing Thru Life.”

Porter said Dancing Thru Life tries to keep the costs of joining as low as possible for students, as the group’s mission was originally to help economically disadvantaged children, but it does ask for a $16 donation. The donation covers the cost of a shirt that is used at upcoming performances, although it is not required for participation. Funding for the group largely comes in the form of sponsorships and fundraisers.

The group also recently expanded its services into a program called Dancing Thru Decades, which focuses efforts on senior citizens in the area. The group hosts lessons in interested senior centers three times a week over a two-week period.

“The testimonies have been incredible,” Porter said. “There’s so much science and research backing music and dance for opening those neural pathways [in dementia], but the animation and engagement from the seniors at the home is completely different for us than any other activity they do there.”

The overall purpose of the group, Porter said, is to show dance is something everybody can do.

“Dance has no age limits,” she said. “Anybody and everybody can dance.”

Those interested in supporting Dancing Thru Life can take part in the group’s upcoming fundraiser, Death at The Disco, on Oct. 25.