Q&A: Katy Fire Chief shares what changes are in store for department 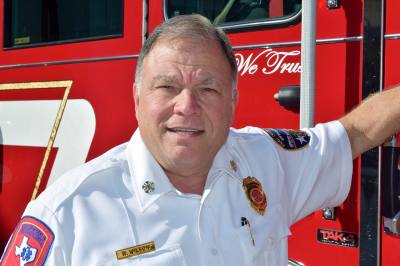 Katy Fire Department’s Chief Russell "Rusty" Wilson sat down with Community Impact Newspaper to discuss changes to the department brought on by growth and a shift from a volunteer fire department to a professional fire department. Former Chief Rufus Summers began the professional department’s transition in 2013 and Wilson continued the task with modernization and new department standards from equipment to staff development. Wilson served in the Irving Fire Department for 27 years prior to taking his position last May. He has a master’s degree in fire and emergency management administration from Oklahoma State University. Answers have been edited for clarity and brevity.

What issues did you identify when you started as Katy fire chief that you have addressed already?

I discovered there had been no fit testing for the self-contained breathing apparatus [a firefighter’s oxygen tank], so now we have a fit testing machine and we fit test every person. We are getting a diesel exhaust extraction system that will hook directly to the tailpipes of diesel engines and get those particulates out of [garage bays], which can settle in the lungs. We put in a succession plan for firefighters. We had not had [a career plan] before.

What was the largest inefficiency you saw walking in, and what have you done to improve that?

Typically, fire departments expect to see 85 to 86 percent of calls be [emergency medical services]. So, we rewrote the job description of certified firefighter to include medic. Now, when we hire firefighters we post those jobs as “paramedic preferred.” We implemented incentive pays for certifications. So, [an employee] could come in here a firefighter, go to paramedic school and get paid for that [certification].

What is still on your to-do list as chief?

In the immediate future, it’s Fire Station No. 2. The bids were collected for the general contractor Oct. 19. We’ve gotten that step down, and hopefully, we’ll be breaking ground in the next month or so. I have until Feb. 4 to have 16 firefighters to man Station 2 hired. We purchased a swift-water rescue boat [and high-water vehicle]. We’re in the process now of sending groups of firefighters to tech school to become ... swift-water technicians.

Editor’s note: After this interview, a contract was awarded to Bass Construction Co. from Rosenberg.

What does your command structure for Station 2 look like?

We’ll have a station captain. He will be over the station and be in charge of the station crew. He will then have an equipment operator or driver and two firefighters. We’ll just move one [medic from Station 1] down and we will then have a driver —a medic—and a firefighter as his partner. [The two stations] will cover each other, but assets will be more strategically placed.

What have you done to improve morale and maintain staffing?

What [firefighters] have historically been bad about is promoting people and not giving them experience or training. I was promoted to lieutenant and sent to a busy station so I could get experience. I worked one shift as a lieutenant and the very next shift, I came in and [management says], “OK, now you go up to Station 10 and you’re going to be the station captain up there.” We are very aggressively doing an officer development process now. Everybody has to know the next grade up, [which involves] a lot of administrative skills.

What improvements do you want to make to the Katy fire marshal’s Office?

I plan to add two inspectors to the fire marshal’s office. One will also be certified as a fire and arson investigator for when our regular marshal, Warner Preston, is out. The second will have public fire education added to his inspector title. We badly need inspectors to inspect the new commercial properties that have been added in the city for the last several years. I consider inspections of these commercial buildings a matter of life safety, not only for our citizens, but for the protection of our firefighters.

What do you want Katy residents to know about the department?

The big thing is the level of professionalism that’s gone up. We’re not going to have one guy that’s been on an ambulance 10 shifts in a row. I think the quality of care and the level of professionalism that we’re requiring upon hire [has increased], and we are requiring that to be maintained. To me if you boil it all down, we’re here for the citizens, and we can always get better. It doesn’t mean we’re bad, but we can always get better, so how can we better serve the citizens? Well, we up the level of our training, and consequently, then the resulting certifications. [If we] give [an] incentive to do that and [continue] throughout a career, well, we’re going to get better and better.