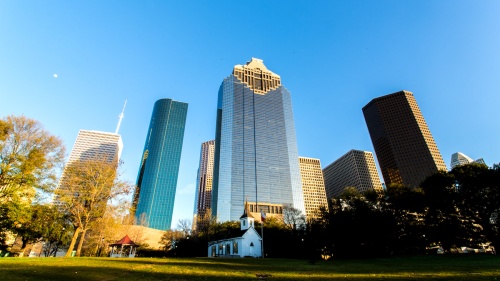 Hundreds of Houston’s public and private sector leaders gathered at the last State of the City address of Mayor Sylvester Turner’s first term May 20.

Among the highlights Turner discussed were job growth, substantial flood mitigation plans and a new “50-for-50” parks plan that aims to pair 50 underserved parks with 50 private companies for volunteer opportunities and monetary donations.

Turner also said more work is needed to close the achievement gap among students in Houston and address traffic, the No. 1 concern from residents reported in the recently released Kinder Institute Houston Annual Survey.
Job growth continues
The city of Houston added 86,200 new jobs in the past year and has reached its lowest unemployment rate since 1981, Turner said. With 3,000 startups now based in Houston, much of that growth is from tech industry interest, which Turner said he hopes to continue encouraging, dubbing the city the “Silicon Bayou.”

"[In] Silicon Valley, affordability is a factor there. What we said to them, 'You could make millions of dollars in California and buy a million-dollar home for 1,100 square feet," He said. "We can introduce you to make millions of dollars here, and we can put you in a 6,000-square-foot home, and we'll give you back a refund and a check, and you can move your furniture."

Pairing parks with the private sector
In a new initiative, the 50-for-50 program, Turner said he plans to work with the Houston Parks and Recreation Department to identify 50 parks in underserved areas of the city and find 50 private companies willing to donate funds or organize volunteer efforts for them.

Securing flood funds
As funding for flood mitigation efforts begins to trickle in from the federal government, Turner said more progress can be made to minimize damage from future rainfall events. However, he pushed for a more streamlined process and additional help from the Texas Legislature.

“We need a revolving fund created on the state level because the federal government has to change its paradigm when dealing with natural disasters like Hurricane Harvey. It does not make sense, and people do not understand why 19 months after a disaster we're still waiting on infrastructure dollars,” Turner said. “There needs to be a paradigm shift at the federal level in terms of how we get dollars out to local government entities.”