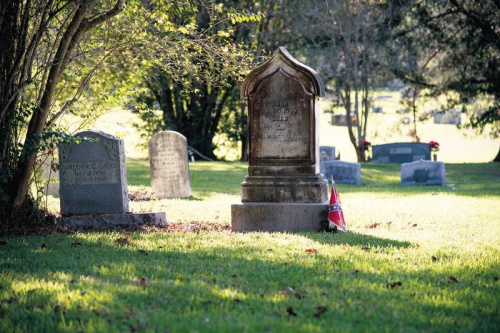 Montgomery County is the home of more than 150 private and public cemeteries dating back to the 1800s. People go on cemetery tours for numerous reasons, including to learn about their genealogy or to admire the intricate sculptures on the headstones, said Larry Foerster, Montgomery County Historical Commission chairman.
“There are some people who go [to cemeteries] because they like the ghoulish atmosphere of it, but there are more people who are fascinated by history and want to look at tombstones of historical figures from the locale,” he said.
Foerster said some common markings to look for while touring Montgomery County cemeteries include sculpted doves, lilies and lambs for children who died during infancy, headstones that look like stacked logs to symbolize the Woodmen of the World, and hands clasped together in the Freemason’s symbol. Oakwood Cemetery
Located on the corner of N. 10th Street and E. Davis Street in Conroe

Oakwood Cemetery is the burial place for many prominent families who lived in Conroe and Montgomery County. One famous name is that of Dr. J. F. Collier, the first mayor of Conroe in 1905. Foerster said Collier was a doctor who built his office in downtown Conroe following the fire of 1911. The cemetery also is the burial place of 12 Confederate soldiers, whose graves are marked with Confederate flags.

Conroe Community Cemetery is an unkempt burial place of many African American individuals who settled in Conroe during the post-Civil War era. Foerster said the cemetery is overgrown and in need of restoration. Prominent residents buried in the cemetery include Sergeant Luther Dorsey, a Buffalo soldier of the 10th Army Calvary, as well as Mittie Campbell, the woman who founded the first public African American school in Conroe in 1919, which later became Booker T. Washington High School.

Old Methodist Church Cemetery
Located near the intersection of Hwy. 105 W. and Pond Street in Montgomery

The Old Methodist Church Cemetery is located adjacent to the historical Montgomery United Methodist Church. The churchyard of the Methodist church started being used for burials in the 1840s. The cemetery is also the burial site to many of Montgomery’s early settlers, including Rev. Thomas Chilton, who was a U.S. representative, a friend to frontiersman Davy Crockett, and a ghostwriter for Crockett’s autobiography “Narrative of the Life of David Crockett.”

Montgomery Cemetery was founded in 1868 and it is located directly west of Montgomery City Hall. The land was donated by Willis co-founders Peter J. and Richard S. Willis because they did not want horse thieves buried in Old Methodist Cemetery, Foerster said. One such horse thief was Montgomery County attorney William McGrew/McGraw and his half-brothers. The cemetery is also the burial place of Dr. Charles B. Stewart, the first Texas Secretary of State, signer of the Texas Declaration of Independence and the designer of the Texas Lone Star Flag.

Montgomery Memorial Cemetery
Located near the Hwy. 1097 and FM 149 intersection in Montgomery

The cemetery is the burial site of citizens of Old Danville, which is now a ghost town, Foerster said. Among those buried at the cemetery is Samuel Linsey, whose son Jonathan Lindsey died during the Battle of the Alamo, and William Spiller, who was the owner of a tobacco farm, Esperanza Plantation, which was located near what is now known as Esperanza Road off Hwy. 75.

The cemetery is the burial ground of 36 Confederate soldiers as well as prominent residents from Danville and Willis. The
22-acre cemetery was founded in the 1800’s.