DEVELOPMENT: 15 projects under construction in Cy-Fair in 2019 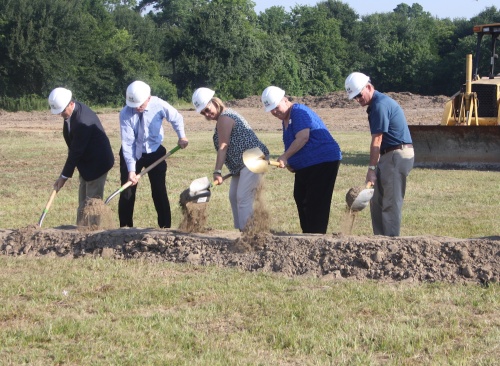 These projects are under construction or are set to break ground in 2019.

The new 320,000-square-foot campus for AIV, which builds and distributes valves and actuators for the oil and gas industry, is slated to open Feb. 18 on NW Lake Drive.

The final homes in Bridgeland’s Lakeland Village are underway. Harmony Grove is slated to have 68 one- to two-story townhomes ranging from 1,563-2,063 square feet. The community’s two- to three-bedroom homes will start in the $220,000s, according to a press release. Beazer Homes will be the sole homebuilder for Harmony Grove, focusing on modern farmhouse and modern craftsman styles. A model home is slated to open in January.

Work on water wells, wastewater treatment plants and detention facilities has been ongoing at Dunham Pointe, a future 2,500- to 3,000-home community south of Hwy. 290 between Mason and Mueschke roads in Cypress. Developer Archie Dunham said he hopes to begin the process of extending Mason Road south of Hwy. 290 around December 2019, with an extension for Mueschke Road coming roughly 3-6 months after. Dunham said he plans to wait on negotiating with commercial developers and home builders until after the Mason Road extension is underway.

SCS Construction Management broke ground on a new 27,000-square-foot Cypress Assistance Ministries headquarters July 25 on Cypress North Houston Road in Cypress. The headquarters is needed to accommodate growth and be more accessible to those in need, officials said. All nonprofit services will relocate from 11202 Huffmeister Road, Houston, to the new facility, which is slated to open by the end of May.

The 92-room Tru by Hilton is slated to open May 23 at 27204 Hwy. 290, Cypress. The hotel will feature an on-site fitness center as well as a 2,880-square-foot lobby with areas for guests to work, play pool and board games, and access snacks and drinks, including single-serve wine and beer.

6. The Shops at Telge Crossing

The Shops at Telge Crossing, a 24-acre mixed-use development being built by Capital Retail at Telge and Jarvis roads, is expected to open this spring. The project will include pad sites, 15,000 square feet of retail space, 12,000 square feet of medical office space and 300 apartment units. Proposed pad site tenants include 7 Eleven and Shipley Donuts.

Work is underway on a 52,000-square-foot multiuse sports facility, which will open in February at the Louetta Automotive Sports Complex on House Hahl Road in Cypress. The facility will feature six full-size basketball courts that can be converted to be used for other sports as well as a lobby and a snack bar. Developers with Diverse Management and Development said future plans for the complex include the construction of a three-story office building. An InSPIRE Rock rock climbing gym opened at the site in September.

Preliminary construction is expected to begin in early 2019 on Starwood Farms, a 244-home townhome project located on a 26-acre site at 12603 Telge Road, Cypress. All units—which will be spread out across a series of fourplexes—will be about 1,650 square feet with three bedrooms, 2.5 bathrooms and a one-car attached garage. The first buildings should be ready for move in by late spring 2020, according to officials with Fourplex Investment Group. Sales prices are estimated at $172,000 per unit or $1,650 for monthly rent. Amenities will include a swimming pool, clubhouse, multiple playgrounds, a dog park and a walking trail.

A Randalls regional distribution center on Telge Road is being converted by Crow Holdings Industrial into the 70-acre Highland Grove Business Park, expected to be finished in April. The park will be located at 10700 Telge Road, Houston. An expansion underway at the site will add another 458,000 square feet of space to the existing 631,000 square feet of space. The new space will entail three new buildings for a total of six buildings at the site.

Land Tejas, the developer behind the Miramesa master-planned community in Cypress, purchased 300 acres of land west of Fry Road in May to expand the community. Officials said they expect to deliver homesites to builders for the new section around mid-2019, although homebuilders have not yet been announced.

The city of Jersey Village purchased 23 acres of land south of Hwy. 290 near Jones Road in August with hopes to spur developer interest in the tract, where city officials envision a future mixed-use project also known as Jersey Crossing. Although city officials have expressed optimism they are nearing an agreement with a developer, no plans have been finalized as of press time. Plans for the land could entail a mix of residential units, retail, restaurants, entertainment options, office space, a hotel and open green space.

Preliminary construction is underway on 18 acres of land owned by Costco Wholesale along Hwy. 290 west of Cypress Mill Estates. Land plans were approved by the Houston Planning Commission in August, but officials with Costco said they do not comment on new locations until it is within three months of opening. Additional details about the store or its opening timeline are unknown as of press time.

Officials with the city of Jersey Village are in the process of designing a 10,000-square-foot golf course convention center to replace the existing clubhouse at the Jersey Meadow Golf Course. In September officials received a presentation from PGAL, the architecture firm brought on to design the center. Plans call for a two-story building with a golf pro shop, restaurant and bar on the first floor, and convention center space on the second floor, including an outdoor balcony. Construction could kick off in May and last about 8-9 months, during which time the existing clubhouse would remain open.

Caldwell Companies continues to develop Cypress Crossing, a mixed-use development located at Hwy. 290 and FM 1960. French Press Coffee House opened at the site in December, and California-based chain Lazy Dog is under construction with plans to open in early 2019. Additionally, Kelsey-Seybold has broken ground on a four-story, 75,000-square-foot medical office building, and Staybridge Suites plans to break ground on a new three-story, 115-room hotel in 2019. Another 64,000 square feet of space for restaurant, retail, office and professional services will also be underway this year.

A new commercial building is under construction at the southwest corner of the Boardwalk at Towne Lake. Officials with Caldwell Companies said Houston Methodist has leased the top floor, and retail and dining businesses can lease sites on the ground-level floor.