6 transportation updates to know in the Bay Area this December 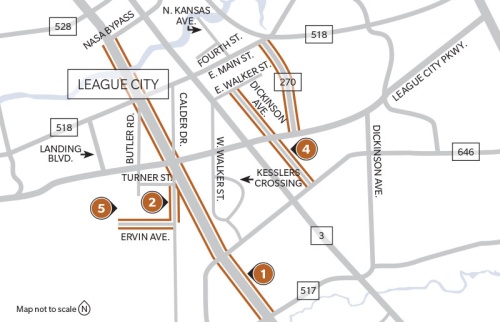 The Texas Department of Transportation is widening I-45 from six to eight lanes all the way to Galveston. Two segments of the project stretch through League City and include improvements to several intersections, including the addition of extra lanes and sidewalks. It is expected the contractor will demolish the FM 646 bridge, which currently goes over the I-45, early next year to begin rebuilding it beneath the interstate. The contractor will have six months from demolition to reopen FM 646 to east- and westbound traffic.

This stretch between Turner Street and Ervin Avenue is being converted from a rural, open-ditch roadway to a two-way street with a center turn lane and curb and gutter. Due to an unusually wet September and October, restoration of two-way traffic has been moved back from January to mid-February 2019. A new roundabout at the intersection of Calder and Turner opened in mid-September.

This project will widen a 2.7-mile stretch of FM 270 from south of FM 518 through the Hwy. 96 intersection to the south from a two-lane road to a four-lane, divided, curb-and-gutter street. All construction will be within the existing TxDOT right of way. Once design is complete, staff will partner with the Houston-Galveston Area Council and TxDOT for funding. This project is part of Phase 1 of League City’s Master Mobility Plan.

This new arterial roadway will connect Calder Drive to the new Hobbs Road extension to the south. The street will provide better accessibility for Sedona subdivision residents, other neighboring communities and future development in the area. City staff has completed the project’s design and is now acquiring the right of way. This 1.7-mile stretch of road from Clear Lake City Boulevard to Horsepen Bayou will be expanded from a two-lane street to a four-lane street with a median in between. A 10-foot-wide bike trail will be built on the road’s west side.