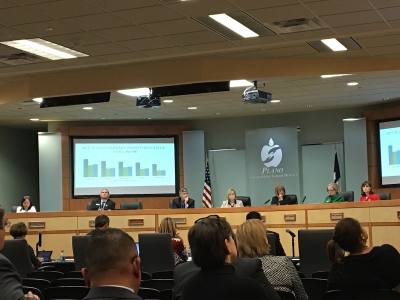 At Tuesday evening's Plano ISD board of trustees meeting, trustees approved a $1.5 million expenditure to replace scoreboards at two PISD stadiums. Trustees also approved an update to the Plano Academy High School's weighted GPA policy that will affect students enrolling in the ninth grade for the 2018-19 school year. Read more about Tuesday's meeting below:

Plano ISD trustees approved an expenditure of over $1.5 million to replace the Clark and Kimbrough stadiums’ scoreboards.

Daktronics, the firm awarded the contract to carry out the project, will replace the existing scoreboards and sound systems of both stadiums, according to a district-prepared document.

The expenditure allots over $800,000 for the Clark contract and over $700,000 for the Kimbrough contract, according to the document.

Susan Modisette, assistant superintendent for campus services staff, said the decision is not affiliated with the district’s current push to readdress its class ranking policy.

The vote for the updated resolution did not pass, and the original resolution remained intact.