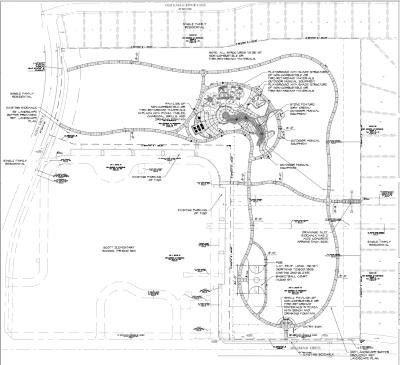 McKinney Planning and Zoning will discussed site plans for George Webb Park during a meeting Jan. 23.

1. Myers Park improvements to be discussed at Commissioners Court meeting
Collin County Commissioners will discuss awarding nearly $123,000 to North Rock Construction for hardscape improvements at Myers Park, 7117 CR 166, McKinney. Improvements to the park include stone steps from the Farm Museum to the perennial garden parking area and a flagstone walkway at the garden, according to county documents.

County Commissioners will meet Monday at 1:30 p.m. at the Jack Hatchell Administration Building, 2300 Bloomdale Road, McKinney. The agenda can be found online. 3. Site plan for George Webb Park presented to city Planning and Zoning Commission
A site plan for George Webb Park, a neighborhood park to be located near Scott Elementary School at the southeast intersection of Eden Drive and Old Eagle River Lane, will be discussed at the planning and zoning commission meeting Tuesday. Site plans for the park include a basketball court, two playgrounds with shade structures, outdoor musical equipment and pavilions. The plans also call for a plaza with picnic tables, drinking fountains and charcoal grills.

The meeting will take place at 6 p.m. at City Hall, 222 N. Tennessee St. The agenda can be found on the city’s website. The meeting will take place Tuesday at 7 p.m. at the district’s administration building, 1 Duvall St. The agenda can be found on the district’s website.

5. Towne Lake Park to reopen
Towne Lake Park, which has been closed since Jan. 2, is expected to reopen by the end of the day Thursday. The city of McKinney replaced aging playground equipment. This is a city-wide project that began with Towne Lake Park. Work will be completed one playground at a time, and each playground will be closed during construction, according to the city. More information about Towne Lake Park can be found on the city’s website.

The Mexican restaurant opened in the historic downtown district on Halloween in 2019 with aspirations of serving both authentic Mexican cuisine and American mainstay dishes.