4 Keller, Fort Worth transportation projects to know about in June 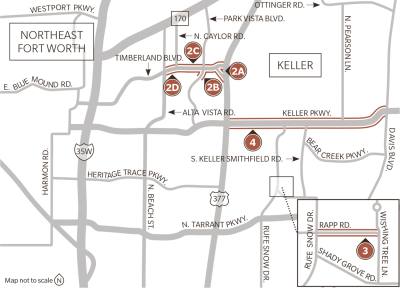 Work began in mid-May to repave and restripe Rapp Road between Rufe Snow Drive and Wishing Tree Lane. Rapp will remain open during most of the construction as site and safety conditions allow. Some of the road may stay closed overnight for several days while extensive work is done between Rufe Snow and Chapelwood Lane.
Timeline: May-June
Cost: $100,000
Funding source: city of Keller

The 3.86-mile project will repave FM 1709/Keller Parkway between Stonebridge Lane in Southlake and US 377/Main Street in Keller. Lane closures will occur from 9 p.m.-6 a.m. Sunday through Thursday during overnight construction. Work will include road repairs, repaving and restriping. The project will also include intersection improvements at Keller Parkway and Rufe Snow Drive and Keller Parkway and Keller-Smithfield Road. The intersections will be restriped to provide turn and straight lanes for northbound and southbound traffic, and adjustments will be made to medians and the radius for turns.
Timeline: May-September
Cost: $2.47 million (FM 1709/Keller Parkway repaving), $300,000 (intersection improvements)
Funding source: Texas Department of Transportation

Hawaiian Bros now serving up island specialties in Fort Worth

The menu features a variety of proteins, such as teriyaki chicken or seasoned vegetables.