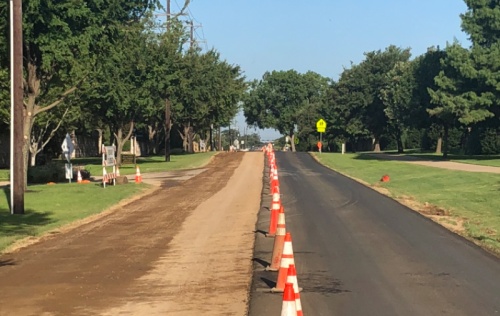 The city of Colleyville recently began the rehabilitation and resurfacing of McDonwell School Road.

As drivers move around town during August and September, here are some transportation projects to keep in mind: The city of Grapevine approved this project to improve traffic mobility adjacent to the Aura Four44 apartment complex at the intersection of Nash and Berry streets. The project will also enhance connectivity in the area of the Dallas Road development and nearby city facilities, such as The REC of Grapevine, the Grapevine Public Library and the Grapevine Convention Center, officials said. The connection between Nash and Berry has been inaccessible to vehicles as crews have worked to install utilities and storm drainage along the project area. The road will eventually connect to a portion of the Cotton Belt hike and bike trail as the downtown Grapevine area becomes a pedestrian-focused corridor. Crews have finished placing concrete pavement on the west side of FM 1938 at the north end of the project. The Fawkes Lane tie-in at FM 1938 has also been reopened. Crews have installed lighting foundations, retaining walls, driveways and sidewalks on the north end of the project. At the southern portion of the project, the sound wall has been installed near the subdivision on Lovegrass Lane. In August, crews will build the remaining retaining walls and median curbs and install irrigation and landscaping at the north side of the project. Other work includes signing, striping, and permanent lighting and painting. Officials expect this project to be substantially complete later this summer. The city of Colleyville recently began the rehabilitation and resurfacing of McDonwell School Road. Crews will resurface the road from Westcoat Drive to Precinct Line Road. Crews will add mill and overlay to protect the surface of the road. Eastbound traffic on McDonwell is expected to be detoured until the completion of the project. Column shafts have been drilled, and crews placed columns for the bridge expansions at Harwood Road, Cummings Drive, Cheek-Sparger Road and the FM 157 southbound exit ramp over SH 121. Concrete caps for bridge columns have been set at Harwood and Cummings. Crews have also demolished the existing concrete bridge rail on the inside sections of Harwood, Cummings and Cheek-Sparger. The contractor is drilling column shafts and placing concrete columns for the remaining bridge expansion sections at Cheek-Sparger. Crews will also place concrete caps for columns at Cheek-Sparger and the FM 157 southbound exit ramp.