Developers are turning dirt throughout Frisco. Developments include office parks, retail centers and residential neighborhoods. The following are some development highlights of different projects coming soon. Newland Communities recently announced the planned opening for a new 735-acre residential community this summer just south of Main Street and west of Custer Road. There are currently 27 homes completed or under construction in the community. The project is allowed to have up to 2,500 single-family homes and 1,400 multifamily units, but current plans include fewer homes and units. Newland has been working with the city of Frisco to arrive at a final land plan, which will provide a final count.

Officials said the community will offer a variety of floor plans created for people at every stage of life. Home prices range from $400,000-$700,000. The community’s hub is the Orchard House, a modern farmhouse with a cafe and bakery, a fitness center, pools, a splash pad and a grilling area. The community will also include amenities such as 4.5 miles of trails with a planned catch-and-release pond and dog park. 3. Parkwood retail center
Construction completed April 12 on a retail center at the southeast corner of Parkwood Boulevard and Warren Parkway. The center is 7,397 square feet on a 0.76-acre lot with 36 parking spaces. The center can be used for retail space, office or medical use. The property is about 40 percent leased with 60 percent still available. 4. The Maxwell
The Maxwell is near completion at the intersection of Cotton Gin Road and Legacy Drive. The Maxwell is the second and last phase of a residential development at The Canals at Grand Park. The project broke ground in May 2016 and is expected to be complete this fall. The four-story apartment development has 325 new units, and sizes range from 506-1,806 square feet. Amenities include an amenity center, a resident lounge, a coffee bar, bike storage and a bike repair station.

The first phase of the project, called The Kathryn, is a 365-unit apartment development that was completed in November 2017. The development was going to initially be done in three phases, but the developer, StreetLights Residential, sold the land, and it is now planned to become townhomes.

5. CB JENI Homes at The Canals at Grand Park
CB JENI Homes will begin its third phase of townhomes at the Canals at Grand Park. The home builder bought the land located on the southwest corner of Diamond Point and Legacy Drive from developer StreetLights Residential. The homebuilder plans to build 43 townhomes with construction starting sometime in late 2018 or early 2019. 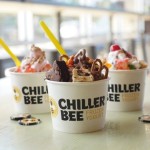