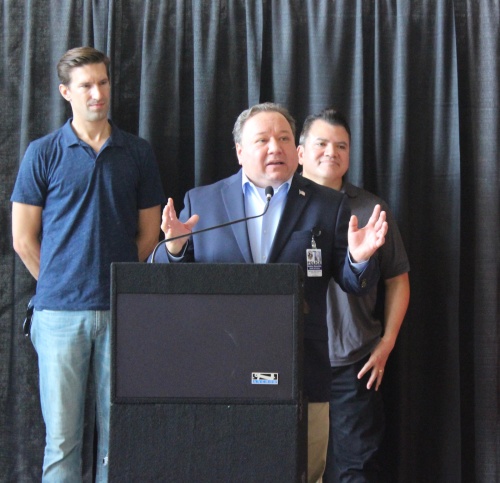 During a media availability session Tuesday afternoon, Austin ISD Police Chief Ashley Gonzalez and police Capt. Chris Evoy sat down with Community Impact Newspaper to discuss back-to-school procedures and what the district has addressed regarding school safety over the summer.

Gonzalez was hired by the district April 30 and began his new role May 24.
What have you been looking at since starting the job in May?
Gonzalez-I’ve been assessing [the district] and am happy to see administration has already taken several steps to make sure our schools [will] be safer for students. I’m relieved that [administrators] were already in the process of considering some of the emergency response plans that were recommended by the governor’s office. Being from Connecticut and near Sandy Hook, I was familiar with those as well, so we will be rolling that out with training for teachers, staff and our police department.

Having a police force for a school district is not common across the U.S. What role does the Austin ISD Police Department play and what do they respond to?
Gonzalez-We’re regular police officers who have the additional responsibility to work in a school-based policing environment. Austin ISD is very fortunate to have a dedicated police department that can deal specifically with issues that arise at school campuses. Officers respond to a variety of calls–from disturbances to assaults–but when we’re not responding to those calls, we are a resource to students. We work on building relationships in the event [students] have a concern or they hear something.

Which projects have the district been working on over the summer?
Evoy-There’s quite a bit that we’re looking at—like camera systems. At elementary schools, there are PA systems where [visitors] ring a doorbell and check in, [and] we’re trying to do the same thing at our middle schools and high schools.

Gonzalez-[Assessing safety] is an ongoing thing. We look at it very critically. School resource officers that spend time on campuses make suggestions that are given consideration by administration, and we try to make a determination of what has to be implemented and how quickly we can get it done.

How is the department preparing for the new school year?
Gonzalez-There’s a lot of work going on behind the scenes. We’ve been very busy this summer talking about safety and security, and doing training. There’s a lot of new teachers and faculty that have been hired, so we’ve been working hard to train them as far as our protocols and guidelines so they’re familiar with the campuses.

We’re also launching [educational outreach] for our residents. They have to be aware that school buses will be out in full force, and we like to remind [residents] to keep a safe distance away from buses, to watch for lights and not to pass school buses when the stop arm comes out. Allow extra time to get to and from work. Keep your patience, keep your head up, put down your devices and remember that school zones are posted at 20 MPH for a reason. We want people to slow down because a lot of our kids walk to school and take bikes.