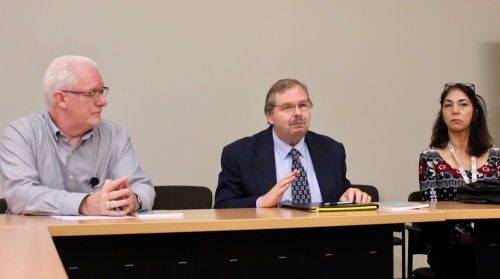 The Travis County Tax Office announced today that it will open its southeast satellite location, at 4011 McKinney Falls Parkway, Austin, on Wednesday.

The office will be open 8 a.m. to 4 p.m., Mon.-Fri. Customers can register vehicles, complete title work, register to vote and pay property taxes at the southeast location. However, the office will not process dealer transactions, which must be completed at the main tax office, 5501 Airport Blvd., according to a Sept. 18 news release.

Here is an updated map of the tax office locations that will be open as of Sept. 19–the main office on Airport Blvd., Pflugerville branch and McKinney Falls Parkway branch.

All four of the county’s satellite offices were closed in May due to an investigation into fraudulent motor vehicle transactions. Tax assessor collector Bruce Elfant had previously announced during an Aug. 28 presentation to county commissioners that his staff planned to open to McKinney Falls location Sept. 18.

Three of the four satellite offices remain closed at this time because recruiting, hiring and training qualified employees is taking longer than anticipated, he said. The Pflugerville branch, located at 15822 Foothill Farms Loop, re-opened July 24. The main tax office on Airport Blvd. is also open.

The Oak Hill office, located at 8656 W. Hwy. 71, Bldg. B, is slated to open in mid-October, Elfant said in August.
SHARE THIS STORY