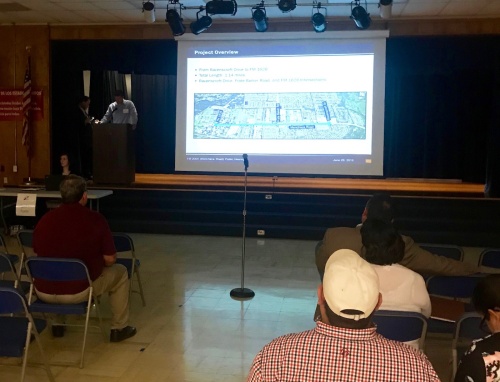 Residents listen to a presentation about the Manchaca Road widening project on June 28, 2018. 2. City of Dripping Springs
The city of Dripping Springs announced a second settlement agreement in its effort to obtain a wastewater discharge permit from the Texas Commission on Environmental Quality on July 6. The first agreement was with the Lower Colorado River Authority in October. The city has reached a settlement with all designated parties­—which range from environmental organizations, such as Save Barton Creek Association and Protect Our Water, to groundwater conservation districts, including Hays Trinity Groundwater Conservation District, to area property owners—except Save Our Springs, according to the city.

3. City of Sunset Valley
At its meeting June 19 Sunset Valley City Council approved parking regulations on Reese Drive for the first three properties on each side of the street just south of Jones Road. In the past Sunset Valley Elementary School parents and others have parked cars and made travel on the road difficult during peak school hours, which residents discussed at a meeting in May.

Approved regulations will prevent vehicles from parking on the roads Mon.-Fri. from 7-8:15 a.m. and 1:30-3:30 p.m. year round. Area residents will be given removable parking permits that will allow them to park a vehicle on the road without being in violation.

4. Manchaca
A June 28 public hearing presentation at Menchaca Elementary School outlined details of the Manchaca Road widening project, which could receive environmental clearance this summer. Jesse Bullard, project manager with the Texas Department of Transportation, said improvements will help mitigate expected increases in traffic from future area development and traffic demands. Bullard said placing noise barriers at certain locations on the road could mitigate potential noise created by the increased capacity of the road. Construction could begin in fall 2019. 5. Oak Hill
According to the Austin Transportation Department, a new traffic signal was activated July 3 at the intersection of Southwest Parkway and Terravista Drive near the Lantana Place development and a little over a mile north of the Travis Country neighborhood. Residents in area developments, including Escondera Condominiums, had called for the signal to be built due to concerns of increased traffic, speeds and traffic accidents on Southwest Parkway in recent years.

6. Onion Creek
In partnership with the city of Austin the Onion Creek Homeowners Association installed two solar-powered, electronic speed-monitoring signs on River Plantation Drive on June 3. The speed limit is 30 mph, and the HOA hopes the signs remind drivers to observe the limit, said Carolyn Dyer, board contact for transportation issues. The signs are collecting data on how fast motorists are traveling, with the first report anticipated to be released to residents in the coming weeks, she said.

7. Village of San Leanna
The Village of San Leanna announced it had discovered an oak wilt infestation May 31. Oak wilt is one of the most destructive tree diseases—responsible for killing over 10,000 oak trees in Austin over the past 20 years—and the disease was last reported in San Leanna 15 years ago, the village’s consulting arborist Dane Avery said. Areas with a dense population of oak trees are susceptible to the rapid spread of oak wilt if prevention and pruning procedures are not consistently followed, he said.