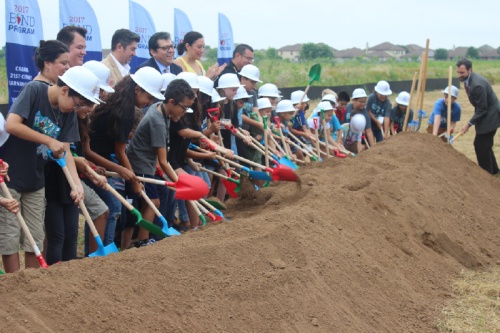 Austin ISD funded 17 projects to modernize or build new schools throughout the district through its $1.05 billion 2017 bond program. Work is scheduled at five South Austin campuses over the summer.

On June 4, Superintendent Paul Cruz thanked the community and the district’s board of trustees for passing the 2017 bond, which will open seven new schools or campuses starting in the 2020-21 school year. Blazier Elementary held a groundbreaking ceremony for its future relief campus June 4. Located at a property adjacent to the current school, the future campus building will house fourth through sixth grade students and give relief to the currently overcrowded campus, according to the district.

Leti Pena-Wilk, who has served as Blazier’s principal since 2011, said the school, originally built for about 550 students, has faced overcrowding in recent years, at times exceeding 1,000 students. She said the community knows the need for the new facility.

“This is a very special moment for all of our school community, one we have waited for, for a while,” Pena-Wilk said.

She said the school and district have been hard at work to create the right new campus that will soon “offer sixth grade to Blazier Blue Jays” beginning in the 2020-21 school year.

AISD began clearing the site for the future Southwest Elementary in January, and the district hopes to begin “vertical construction” by July.

The school is being built to reduce overcrowding at Baranoff and Kiker elementary schools with an expected capacity of 522 students. Boundaries for the future campus are still being decided but could include residents in the neighborhoods of Circle C Ranch and Greyrock.

Address: Southeast of the Trissino Drive and Escarpment Boulevard intersection in Southwest Austin Groundbreaking on a new parking garage for Bowie High School took place June 6. The garage, which could be completed by summer 2020, is one of many improvements and expansions taking place on the campus over the next three to four years, according to Principal Mark Robinson.

Design work for Bowie was conducted by Page Architects, while JE Dunn Construction is the project’s contractor. Robinson said once the parking structure is completed, crews are scheduled to begin to construct a new sports facility at the campus, followed by a new fine arts facility. Other projects at the school will add enrollment capacity and modernize learning areas.

AISD trustee Yasmin Wagner said she was proud to see Bowie “go from an amazing school to one that is the size it deserved with 21st-century learning spaces.”

“It has been no small effort to make this happen,” she said. Work continues at Menchaca Elementary, which broke ground on construction of a new building last August.

With the additional learning spaces added through the bond, the school’s permanent capacity will increase from 606 to 870, according to the district. Construction is underway at the Ann Richards School for Young Women Leaders, which celebrated a groundbreaking on modernization efforts in February. The $70 million project will create a new facility that is scheduled to open in 2021.

The new school will be located at the same address and will feature new athletic fields and added parking as well as the new school building, which is designed to increase enrollment capacity of the school from 924 students to 1,015.