14 transportation updates to know in Round Rock, Pflugerville and Hutto 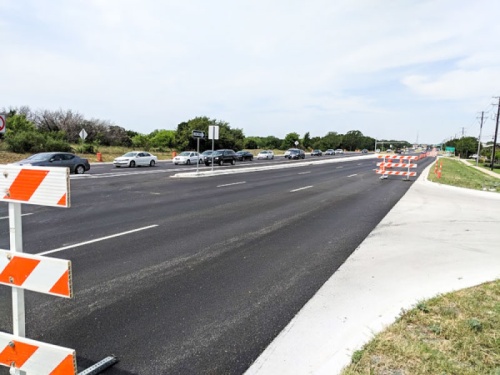 ONGOING PROJECTS
1. I-35 at FM 3406 improvements
The FM 3406 bridge over I-35 reopened in June. Texas Department of Transportation officials say drivers can expect frontage road changes at FM 3406 as crews work on opening two new U-turn bridges in August.

2. I-35 access improvements
Final paving work is underway at the intersection of Hwy. 79 and the I-35 frontage roads, and crews are finishing rail work on ramps.

Recent updates
3. McNeil Road extension
At its completion, the project will serve as a bypass road for downtown Round Rock to improve the flow of traffic, reduce travel times and lower traffic accidents.

Status: Crews will begin preparing the subgrade on the McNeil Road extension and will begin work on curb and gutter installations. The portion of East Bagdad Avenue from Burnet Street to Sheppard Street remains closed.

4. CR 119 extension
This project is a roadway extension for CR 119/Ed Schmidt Boulevard from Limmer Loop to Chandler Road in Hutto that will build a four-lane roadway and a traffic signal at CR 119 and Limmer Loop.

Status: Crews placed flexible base on sections of the project in late July. Work continues on roadway pavement, which allows for expansion work.

UPCOMING PROJECTS
5. Railroad quiet zones, Phase 1
This project will create railroad and street intersections that eliminate the need for train horns inside the city limits of Round Rock. When trains pass, motorists will be prevented from crossing railroad intersections through the additions of medians and four crossing arms. Additionally, red flashing lights will trigger more quickly than at traditional railroad crossings.

Status: Union Pacific Corp. crews will begin their work this month within the company’s right of way. An exact date for the commencement of work has not yet been set, according to city of Round Rock officials. NEW TRAFFIC SIGNAL
A. CR 110 at Hwy. 79
Status: under construction

B. Limmer Loop at Ed Schmidt Blvd.
Status: under construction 2. Weiss Lane improvements
The Weiss Lane project will replace all bridges from East Pecan Street to Cele Road starting with the one-lane bridge near East Pecan. It will also expand the roads from two lanes to four with turn lanes, shoulders, drainage improvements, curbs and gutters.

Status: Crews are focusing on the northernmost section of Weiss. The southbound lanes will soon be prepared for construction, which includes storm sewer, curb and gutter, bridge work and widening the roadway into two lanes.

Crews will lay approximately 4,400 linear feet of new asphalt during construction, and a pedestrian pathway will be built as well.

Status: The city of Pflugerville has closed the road from Becker Farm to Colorado Sand. Crews are laying asphalt.

UPCOMING PROJECTS
4. SH 130 widening, Segment 2
This project will add a third lane to both directions of the toll road from SH 45 N to US 290, with additional entrance and exit ramp construction.

Status: Construction is expected to start in September.