June transportation project updates for Round Rock, Pflugerville and Hutto 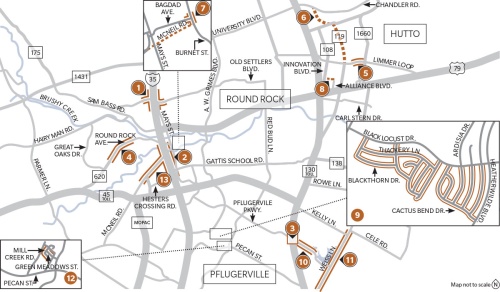 Updates and information on upcoming and ongoing transportation projects in Round Rock, Pflugerville and Hutto for June and early July.

2. I-35 access improvements
Crews in April  installed the final beams for the northbound braided entrance and exit ramps between RM 620 and Hesters Crossing. Crews continue to install reinforced steel and pour bridge decks.

4. RM 620 widening
The 2.74-mile segment of road in Round Rock is undergoing construction to widen the highway from four to six lanes. At its completion the construction will add new curbs and gutters as well as a raised median.

6. CR 119 extension
The project is a roadway extension for CR 119/Ed Schmidt Boulevard from Limmer Loop to Chandler Road in Hutto. Construction crews will work on creating two lanes of a future four-lane roadway with shoulders and a traffic signal at CR 119 and Limmer Loop. Crews broke ground on the project Dec. 7.

Status: Excavation work continues along CR 119. Crews are scheduled to begin tying steel and placing concrete for the deck of Cottonwood Creek Bridge.

Signal work at the intersection of Limmer Loop and CR 119 is underway, and county officials expect a signal to be operational at the location sometime this summer.
Timeline: December 2017-February 2019 completion
Cost: TBD
Funding source: Williamson County 7. McNeil Road extension
At its completion the project will serve as a bypass road for downtown Round Rock to improve the flow of traffic, lower travel times and reduce traffic accidents.

Status: The intersection of Burnet Street and Bagdad Avenue reopened to drivers the first week of June. McNeil Road east of I-35 is open, though traffic can no longer connect to East Bagdad Avenue via the roadway underneath the Mays Street bridge. All traffic must turn left on Blair Street or follow McNeil Road.
Timeline: March 2018-spring 2019
Cost: $4.25 million
Funding source: Round Rock’s Transportation and Economic Development Corporation funds

Status: Construction on the roadway is underway and utilities have been installed. Utility work began in mid-November and finished in April. According to city officials, the next phase of construction will include construction of curbs and gutters as well as work on the road itself.
Timeline: October 2017-June 2018
Cost: $4.95 million
Funding source: city of Hutto Crews will lay approximately 4,400 linear feet of new asphalt during construction, and a nonconcrete pedestrian pathway will be built during this phase as well.

Status: The project has gone out to bid and is awaiting approval from the Pflugerville City Council.
Timeline: May-August
Cost: estimated $2.675 million
Funding source: city of Pflugerville bonds

11. Weiss Lane improvements
The Weiss Lane project will replace all bridges from East Pecan Street to Cele Road starting with the one-lane bridge near East Pecan. It will also expand the roads from two lanes to four with turn lanes, shoulders, drainage improvements, curbs and gutters.

12. Mill Creek Road and Green Meadows Street pavement rehabilitation
This project is part of the city’s Community Development Block Grant action plans and will repair paving and concrete as well as  curb and gutter additions.

13. Railroad quiet zones, Phase 1
This project will create railroad and street intersections that eliminate the need for train horns inside the city limits of Round Rock. Motorists will be prevented from crossing railroad intersections through the additions of medians and four crossing arms. The city and Union Pacific Corp. will work on the project.

Once construction is finished the Federal Railroad Administration will need to certify Round Rock as a railroad quiet zone.