5 development highlights in Round Rock, Pflugerville and Hutto 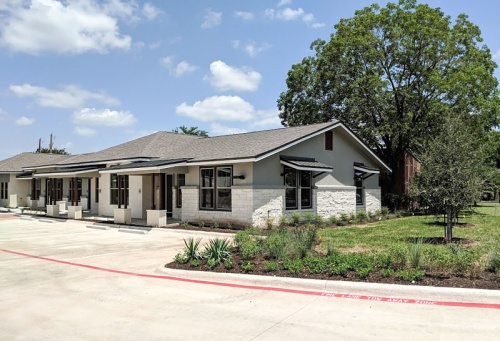 This office park off Old Austin-Hutto Road in Pflugerville just completed construction on its first of three separate condo buildings. The first building offers more than 5,000 square feet of Class A office space. Class A office space is generally regarded as professionally managed, recently built office space in a good location.nNo timeline has been set for the complete delivery of all three phases. The first building is currently offered for lease.

August updates from developments underway in Round Rock, Pflugerville and Hutto. MESA CREEK
The Mesa Creek development will bring more than 50,000 square feet of Class A office space to Round Rock at the completion of its construction. Developers expect the office building to deliver for tenant improvements in mid-September, with a tenant move-in date scheduled for December.

Construction on the development has gone vertical and windows are currently being installed, according to Savills Studley, the commercial real estate agents for Mesa Creek. STONE HILL TOWN CENTER
Construction is underway on new retail and dining space at Stone Hill Shopping Center. The building is on the southwest corner of Stone Hill Drive and FM 685 between Chili’s and the Verizon store.

The building will be the home of Torchy’s Tacos, MOD Pizza, Broth & Basil and one other store or restaurant that has yet to be finalized, according to Marsha Mucks with NewQuest Properties. Once the building is complete the tenants will begin construction on their individual businesses.

Space: 12,427 square feet
Timeline: Construction on the building is expected to be complete in late summer or early fall. There are no estimated opening dates for the tenants at this time. No timeline has been set for the complete delivery of all three phases. The first building is currently offered for lease. STAR RANCH MARKET
Star Ranch Market is a mixed-use retail space just north of the H-E-B Plus grocery store on southbound FM 685 in Hutto. The shopping center is primarily split into two buildings and includes several spaces for restaurants and retail storefronts, including drive-thrus on either building.

Four businesses have already leased space at Star Ranch Market, including two restaurants, a nail salon and Great Clips. Vertical construction on the shopping center began this spring and leasing agents expect the development to finish construction by the third quarter of 2018.

HIGHLIGHTS OF HUTTO
Rio Grande Tex-Mex Restaurant, the lead developers on the Highlights of Hutto development, broke ground on its new 34,704- square-foot location April 25. Slab has been poured on the first of two retail buildings, and steel installation will begin soon, ultimately wrapping up by the end of the year. The new Rio Grande location is scheduled for completion by the end of January 2019.

The development will ultimately bring three separate buildings for retail and restaurant space, including patio space and modern design.