PfISD taxpayers could be voting on a reduced tax rate this fall, and other takeaways from the June 21 board of trustees meeting 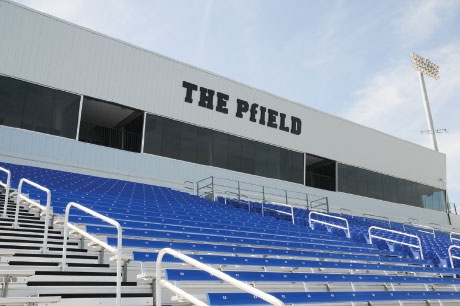 A demographer's report predicts Pflugerville ISD will continue to grow through the next five to 10 years.

Two possible ballot measures could be on the horizon this November for Pflugerville ISD voters. At a June 21 PfISD board of trustees meeting trustees discussed a possible tax rate reduction for the 2018-19 fiscal year as well as the latest updates from the districts’ Citizens Facility Advisory Committee tasked with prioritizing projects for a 2018 bond proposal. Here are the latest updates from the school district.
A tax rate reduction could be on a November ballot
Chief Financial Officer Ed Ramos briefed the PfISD board of trustees on the school district’s finances as it approaches the start of a new fiscal year. PfISD’s tax rate is comprised of a maintenance and operations tax rate, or M&O, and a debt services tax rate, which goes towards paying off bond debts. The two rates added together form PfISD’s tax rate.

Ramos proposed a “tax swap” that would increase PfISD’s M&O tax rate by .02 cents while decreasing the debt services tax rate by .04 cents, resulting in an .02 overall reduction in taxes paid by district residents. This would reduce the total tax rate from $1.54 to $1.52, resulting in an estimated $60 of savings for residents with a $300,000 home. The district has the ability to perform this swap because it is nearly finished paying off its debts from its most recent bond in 2014, Ramos said.

Ramos said the tax swap would trigger a $4 million increase in funding from the state through the Texas Education Association's “Golden Pennies” program. The Golden Pennies program allocates state funds to school districts that have paid off a large enough portion of their bond debt to to afford re-allocating some of the district’s tax collection back to the M&O rate.

Should the trustees approve the proposed swap it will trigger a November election. Superintendent Doug Killian said the board has until mid-September to decide if the district will pursue the swap.

As PfISD approaches paying off the last of its 2014 bond, the final remaining projects funded by it are underway. The board voted in favor of hiring Braun & Butler Construction to serve as the general contractor for the addition of new concession stands at the baseball and softball fields at John B. Connally High School.

Mentions of 2018 bond seeking to address growth
While there were no agenda items directly related to discussing a 2018 bond proposal, the topic was raised several times in relation to other items. If the district pursues a November 2018 bond election, Killian said the main motivation will be addressing PfISD’s rapid population growth. According to the city demographer, PfiSD is expected to add 798 students during the 2018 school year with about 40 percent attending elementary school, Ramos said.

One of the early indications of the bond proposal’s direction is a desire from the CFAC to see funding for to two to three new elementary schools and a new middle school, Killian said. Additions of new schools could also result in updated feeder patterns. The committee will not make a final recommendation to the board however until July 19, at which point the trustees will begin discussing whether or not they will call a November election.