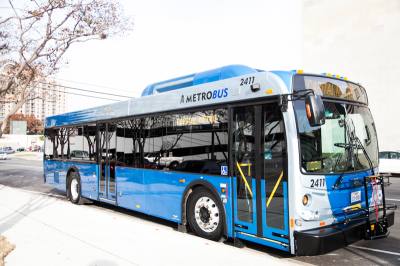 Among the priorities that Capital Metro will be funding in the next fiscal year are additional bus service and federally mandated positive train control safety upgrades.

Capital Metro’s board of directors is slated to approve the fiscal year 2018-19 budget Friday with a total operating budget of $270.7 million and capital expenses are expected to be about $114.5 million. The agency is looking at a balanced budget with total expenses and revenue both coming in at $388 million.

Operating expenses are 3.2 percent, or about $8.3 million, higher than the FY 2017-18 budget. This is largely due to an increase of 300,000 service hours from the Cap Remap service changes that took place in June, said Reinet Marneweck, Capital Metro’s chief financial officer.

Here are 5 things to know about Capital Metro’s budget for FY 2018-19 and the agency’s five-year capital plan: 1. Positive train control is one of the agency’s biggest expenses
Most of the work to implement PTC, which is a federally mandated system that monitors and controls train movements, is occurring on the MetroRail line in 2018, and work will wrap up in 2019, Marneweck said.

“This is the year we have to install the equipment on the entire line,” she said.

2. The agency is providing about 300,000 more service hours
In June, Capital Metro launched its largest service change in history and revamped its bus routes. This resulted in operating some bus routes for longer and adding new routes. Marneweck said the difference, which includes additional MetroRail hours and MetroExpress services that were added in January, is about 300,000 service hours compared to two years ago.

FY 2018-19 represents the first full year of the system changes, and the agency is investing an additional $10. 6 million, of which $9.2 million is for more bus service, Marneweck said. The next fiscal year only includes about $200,000 for the initial planning efforts, but Marneweck said the goal in the next five years is to spend about $32.8 million to purchase 40 new electric buses and install the infrastructure. 4. Bus stop enhancements and new stations are also in the works
In 2018, Capital Metro began adding shelter and shade structures to many of its bus stops.

“We’ve been hearing more and more from customers on how important it is to be comfortable at a stop and have protection from the sun and rain,” Marneweck said.

Capital Metro plans to spend about $3.9 million in FY 2018-19 for bus stop enhancements and $6 million in the next five years. This will include adding solar lighting and cameras as well as replacing any aging amenities.

Adding 16 new MetroRapid stations is also continuing into the next fiscal year. The agency has spent about $500,000 so far and will spend another $1.1 million to add the new stops along routes 801 and 803 to help fill in gaps near new developments and other key destinations.

5. Sales tax growth was strong in FY 2017-18 but the agency is remaining conservative
About 80 percent of Capital Metro’s revenues comes from the sales tax, Marneweck said. In FY 2017-18, the agency expected sales tax to see slowed growth at only a 2.5 percent increase; however, sales tax actually is up by 6.3 percent so far in 2018, she said.

“Fortunately the sales tax turned around with the global economy recovering and the local economy taking off,” Marneweck said.

This resulted in an additional $7.5 million that has been absorbed into the FY 2018-19 budget, she said.

Because sales tax can be unpredictable, Capital Metro only budgeted a 3 percent increase in sales tax for the next fiscal year.

“We’re very excited about the FY 2019 budget and the significant funding it is allowing us to expand our services and customer service,” Marneweck said.