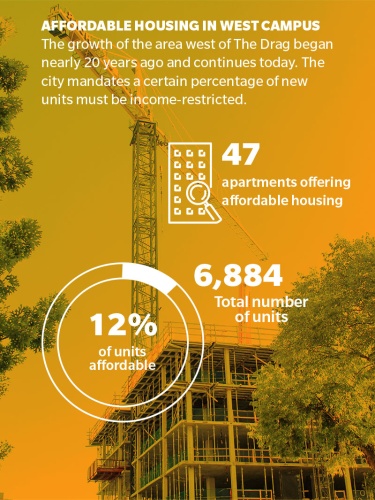 In Central Austin, the median price of homes continues to rise while supply remains tight, according to data from the Austin Board of Realtors.

Meanwhile, for renters, apartment rates have risen even as units are added in neighborhoods across the market. Here are seven trends to watch.

A Travis County judge has ruled that the question of whether residents should have voting power over future land development code rewrites, including CodeNEXT, should be placed on the November ballot.

In March, the city clerk received a valid petition signed by more than 31,000 Austinites demanding CodeNEXT’s fate depend on a public, not City Council, vote. After receiving legal advice that state law forbade citizen vote on matters of zoning, City Council rejected the petition. That led to a lawsuit, where Judge Orlinda Naranjo decided citizen voting power should be put to a vote in November.

If Austinites vote that citizens should have voting power over land development code rewrites, then it is likely citizens will decide on final approval of CodeNEXT in 2019, and the code rewrite, if approved, may not get implemented until 2020.

The project began in 2013 as a follow up to Imagine Austin, the city’s 30-year comprehensive plan that laid out how Austin would manage its unprecedented growth into the future. City leaders, experts and residents criticized the existing, 30-year old land development code as outdated and convoluted.

Over the course of five years, the $8.5 million project has drawn sharp political lines between Austinites who favor the preservation of the city’s existing neighborhood character and those who advocate for additional housing density to respond to growing demand.

District 10 Council Member Alison Alter, who, with Mayor Pro Tem Kathie Tovo and council members Leslie Pool and Ora Houston supported the petition, said the decision does not change the city’s goal of designing a code that the community would support.

"That is what they are ultimately asking us to do," Alter said. "If we came up with a code that the community would  support then they would approve it if it came up for a vote in the future." Austin City Council supported moving forward with a $925 million bond package to fund various city projects in exchange for a 2 cent property tax rate increase for the next 30 years. A significant portion of that proposal, $250 million, is devoted to affordable housing, a historic ask.

“This is the most important investment in affordable housing this city has ever made,” District 4 Council Member Greg Casar said.

The $250 million proposal is a drop in the bucket, however, in Austin’s affordable housing need. According to the recently approved housing plan, the city carries an affordable housing shortage of 48,000 units, which experts estimate would cost $6 billion to fulfill.

City Council voted 8-3 in favor of the proposal on June 28, with council members Jimmy Flannigan, Ora Houston and Ellen Troxclair voting in favor of a more conservative approach. If council votes in August to put the question on the ballot, voters will get the final say in November. Income-restricted affordable housing is reserved for individuals earning a particular amount of money, usually expressed as a percentage of the area’s median family income, or MFI. In Travis County, the MFI is $57,000 for an individual and $81,400 for a four-person household. Governments either directly subsidize affordable housing or incentivize developers to build affordable units in city code. Fourteen years ago, the city of Austin changed its zoning regulations in the West Campus area, creating the University Neighborhood Overlay to promote larger residential buildings that would consolidate university housing and bring more University of Texas students closer to campus.

Since then, development has consistently ballooned in the West Campus area. This fall, the Skyloft and Aspen Heights student apartments will open in the area, bringing  with them a total of 1,141 new units.

UNO regulations require that new housing developments in the area allocate 10 percent of total bedrooms or units as affordable, open to residents from households making 60 percent or below of MFI. Data from the city’s Department of Neighborhood Housing and Community Development show developers have stuck close to those standards. At apartment complexes offering affordable housing, 12 percent of total units are affordable.

“We are now seeing coworking space being taken by large-scale corporations seeking a flexible, amenity-laden work option,” Gump said, adding that the trend has picked up in the last year and he expects it to continue through 2018.

In a national report released in March, CBRE reported that office spaces focusing on employee amenities to build company culture are in increasing demand around the country. In Austin’s downtown, office space is not easy to come by. CBRE’s latest office market report released in July shows a total vacancy of rate of 9 percent in the central business district and 8.8 percent in Central Austin, both under the citywide rate of 10.7 percent.

An influx of apartment unit supply that has grown faster than demand has led to rental rates that repeatedly spike and drop-ultimately flattening out-in the greater Austin area, according to Bruce McClenny of ApartmentData.com.

The median price of a home sold in Central Austin between January and June of 2018 was $460,500, up 3 percent from the same period in 2017, according to data from the Austin Board of Realtors. 7. Home construction down in last year
According to data from Metrostudy, 651 residential construction projects were begun in Central Austin between April 2017 and March 2018, down from 1,308 in the previous year. Metrostudy Austin Regional Director Vaike O’Grady said closings are outpacing home starts, indicating that demand outweighs supply in the market.