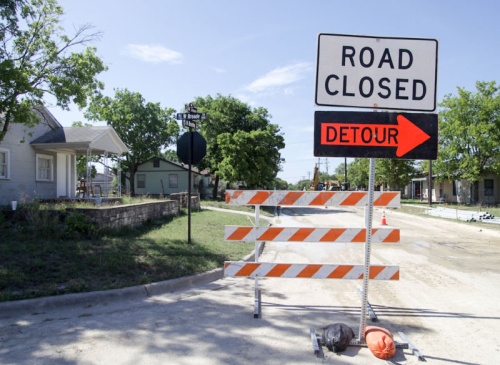 Corrected Aug. 29 at 5:23 p.m. to reflect the accurate timeline for the Bagdad Road expansion. The original article stated that construction began in January.

Learn about August transportation updates in Leander and Cedar Park.

1. The Anderson Mill Road reconstruction project’s Phase 1 was slated to be complete this summer, but it has been pushed to October. The project will reconstruct Anderson Mill in several areas from around the intersection of Gaspar Bend north to RM 1431. The project scope was changed to extend a four-lane section of the roadway, which originally would have been two lanes, so the contract was lengthened by 60 days, according to city spokesperson Jennie Huerta. The city of Cedar Park and Williamson County are funding the project, which costs approximately $7 million.
Timeline:  January 2017-October

2. Bagdad Road is being widened from two to five lanes between Hero Way West and San Gabriel Parkway. The five-lane roadway is set to merge into three lanes until Collaborative Way. Leander Assistant City Engineer Terri Crauford said that after closing the road from Collaborative Way to Halsey Drive in late June, the contractor plans to reopen Bagdad in time for the start of school on Aug. 16, after Community Impact Newspaper goes to press. In the meantime the contractor has also installed temporary asphalt at connections to local roads to improve driving conditions, Crauford said. The $8.2 million project is funded by the city of Leander and Williamson County.
Timeline: April 2017-April 2019

3. The project extending New Hope Drive from Cottonwood Creek Trail to Ronald Reagan Boulevard continues with an anticipated completion date this fall, according to the city of Cedar Park’s website. Once complete, the city will need to create two additional westbound lanes between Arrow Point Drive and Cottonwood Creek. The project also includes the creation of street improvements and a traffic signal at Ronald Reagan, new water and wastewater lines, and the extension of Arrow Point from La Jaita Drive to New Hope. The project is funded by the city of Cedar Park’s general obligation bonds and costs $7.8 million.
Timeline: August 2017-fall 4. N. Brushy Street streetscape
A streetscape project on N. Brushy Street in Old Town Leander will add improvements, such as landscaping and sidewalks. The road will be closed until December. City contractors began construction July 19 on the roadway between Broade Street and South Street, according to the city’s website. Customers of N. Brushy businesses may park at the City Hall parking lot, accessible from Bagdad Street. The city of Leander’s utilities drive-thru lane is closed during construction, but people may drop off payments during the day.
Timeline: June-January 2019
Cost: $1.9 million
Funding source: city of Leander general obligation bonds

5. RM 1431 Gap Project
Traffic was switched for the RM 1431 Gap Project June 30, according to Brad Wheelis, spokesperson for the Texas Department of Transportation. The project will expand RM 1431 between Market Street and Cottonwood Creek Trail from four to six lanes to match RM 1431's six lane section from Sam Bass Road to Market. The switch moved traffic onto new pavement on the south side of RM 1431, which allows the project contractor to build the roadway and bridge on the north side. The next traffic switch will happen in late fall, splitting traffic for construction of a central median, he said.
Timeline: February 2017-March or April 2019
Cost: $12.8 million
Funding source: TxDOT

6. Street rehabilitation project
The city of Leander is scheduled to complete its 2018 street rehabilitation program July 31, according to the city website. The project includes  the mill and overlay, or street surface removal and repavement, of a portion of Bagdad Road;  reconstruction of part of CR 177;  reconstruction of a section of Horizon Park Boulevard; and  shoulder striping of RM 2243 from Apple Springs Drive to the Williamson County line.
Timeline: June-July
Cost: $1.4 million
Funding source: city of Leander