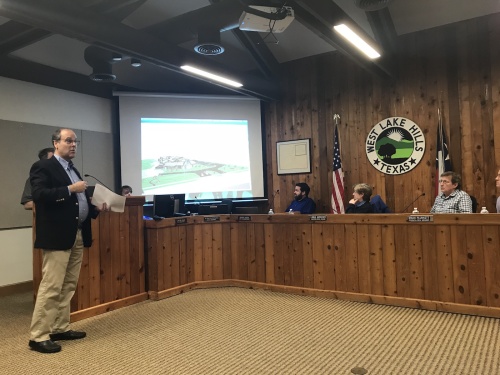 West Lake Hills City Council met Jan. 10 for the first time in 2018. Here are some meeting highlights.
1. Shepherd of the Hills Lutheran Church renovations
After council approved tree removal and impervious cover variances Dec. 13 regarding renovations at Shepherd of the Hills Lutheran Church, 3525 Bee Caves Road, West Lake Hills, church representatives were again present Wednesday with the second part of their proposal. Council approved cut and fill variances, variances to allow decorative boulders and materials for a retaining wall-like structure along berms within the property’s setback and a variance to approve a 36-square feet sign for the property.

Ben Heimsath, lead at firm Heimsath Architects, said the church renovations will improve fire safety by creating standardized fire lanes and consolidating the property’s driveways for clearer entries. The plans also creates spaces within the existing trees that could be utilized by the public and would increase the church’s visibility.

“Shepherd of the Hills has been part of West Lake Hills for 40 years,” Pastor Tom Grevlos said Dec. 13. “We are excited about being here, we love this community, we want to serve and we want to do it in the safest possible way.”

On Wednesday, Grevlos said he does not believe the church has ever had much of a street presence and hopes the improvements will help attract more of the community to the location.

While the city’s zoning and planning commission suggested denial of some of the variance due to a lack of hardship, Council decided the property’s proximity to Bee Caves Road and current Texas Department of Transportation construction should be taken into consideration.

“You can make an argument that this plan buttresses the themes in the city’s master plan,” Mayor Linda Anthony said. “This is a project we would like to see go forward.” 2. Redbud Trail Bridge improvements
Anthony briefly discussed planned improvements to the bridge on Redbud Trail over Lake Austin, which she said has been contemplated by the city of Austin for decades.

The city of Austin is requesting funding from the Capital Area Metropolitan Planning Organization for the project and asked West Lake Hills to pass a resolution of support for it, she said.

However, Council expressed some concerns with the current plan and elected to write a letter with the city’s input instead.

“We all recognize that the bridge needs to be replaced, that it has some serious structural issues, that it could be improved and there are issues with roadway safety,” Anthony said. “But the designs that have been submitted are really problematic for us.”

Key concerns include the bridge doubling in width and being built taller, which could lead to increased traffic into the city and increased light pollution, she said.

“While it specifies in the design that there will only be two vehicular lanes, with all that extra width what’s to preclude it from being used some point in the future to [add more lanes]?” Anthony asked. “Redbud Trail and Westlake Drive simply cannot handle a sizable increase in traffic volume.”

Residents will be able to voice their opinions regarding proposals at a town hall meeting Feb. 18 at 2 p.m. Council could decide to eliminate some of the proposals at the meeting, Council Member Brian Plunkett said.

4. General election to be held in May
West Lake Hills is scheduled to have an election May 5, with Mayor Anthony, Place 2 Council Member Plunkett and Place 4 Council Member Darin Walker up for re-election.

Interested residents can file to run in the upcoming election between Jan. 17 and Feb. 16, according to the city’s website. Candidate election packets are available at West Lake Hills City Hall, 911 Westlake Drive.