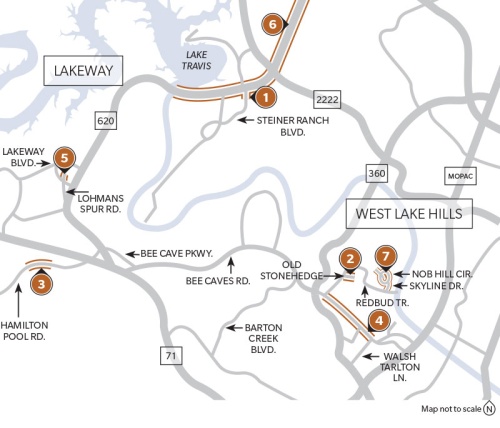 Construction of a traffic signal at the intersection of Steiner Ranch Boulevard and RM 620 began Nov. 13 and was completed Feb. 1. It was activated in early March.

The new water line installation for Old Stonehedge is complete. Paving will follow later this year. TxDOT will create an additional paved surface with a milled edgeline on Hamilton Pool Road from Vistancia Drive to Cueva Drive. A field survey is expected to be complete by May, then design is set to begin.
Timeline: Open for bids, end of 2019
Estimated cost: $2.8 million
Funding source: TxDOT Category 8 systemic widening program

Two projects to add a continuous left-turn lane on Bee Caves Road from Redbud Trail to Walsh Tarlton Lane are underway in the Westlake area. They are on target for summer 2019 completion, and utility work is progressing.

Lohmans Spur Road will be extended to provide access to the site of Lakeway’s new police facility. In February a ground breaking ceremony was held at the police station construction site.

TxDOT plans to repave RM 620 from the Mansfield Dam to RM 2222 and from Anderson Mill Road to SH 45 N at US 183. The project let in January and will begin late spring or early summer. Lone Star Paving won the contract and is combined with a second contract on RM 620 from RM 2769 to SH 45 N for a total cost of $1.48 million.

Skyline Drive and Nob Hill Circle water line installation is underway. The contractor began on Nob Hill and will then move on to Skyline and finally onto Red Bud Trail. Circle Ridge Drive was expected to receive replacement of 2,575 feet of new 8-inch water line in early March.