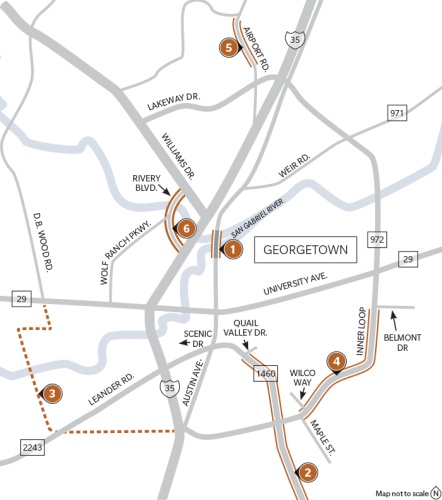 Here is a roundup of recent roadwork and transportation-related updates in and around Georgetown. All information was updated as of Aug. 2. This post is adapted from a section that appears in the August print issue of Community Impact Newspaper's Georgetown edition.

2. Work continues on the $34.7 million FM 1460 widening project between Georgetown and Round Rock, which includes a realigned portion of the roadway north of Inner Loop in Georgetown. The project is developed through a partnership betweent Georgetown, TxDOT, the city of Round Rock and Williamson County.

3. Southwest Bypass
A two-lane north segment of the new roadway opened July 18. Williamson County continues to oversee construction of a 1.25-mile south segment that will extend the Southwest Bypass from Leander Road to the southbound I-35 Frontage Road.

4. Inner Loop improvements
Crews with Chasco Constructors are wrapping up work to widen portions of Inner Loop between Maple Street and Belmont Drive in southeast Georgetown and add turn lanes at several locations along the roadway. Paving of new widened portions of Inner Loop finished in July, and Chasco continues placing topsoil along the roadway, completing sidewalk components of the project and connecting utility lines. Drivers should watch for construction equipment on Inner Loop as work continues in August.

5. Airport Road widening
Patin Construction continued ground-leveling and other preparation work in July for a project that will widen Airport Road from two lanes to five lanes between Lakeway Drive and Aviation Drive near the Georgetown Municipal Airport. Along with widening Airport, crews will move the intersection of Airport and Lakeway and complete improvements to traffic signals in the area. The project is designed to lessen traffic congestion along Airport in order to facilitate business expansion and other economic development in the surrounding area.